Tatsuo's is located on Alahao Place in Honolulu, Hawaii.
It's been unusual times still in the middle of COVID-19, but Pfizer and BioNTech announced promising breakthroughs in their proposed vaccine early last week, so there's hope that vaccinations can roll out by end of 2020 (but most likely sometime in 2021).
The non-food photos here are computer screenshots, with the shot of the outside being from Google Maps.
My uncle dropped off some plate lunches for us from Tatsuo's, a breakfast and lunch spot open since 2006. The lunch menu has the typical plate lunch options found in Hawaii, such as chicken katsu and teriyaki beef. Their Tat's plate (now $16.99) is probably one of their more popular options, a combination plate including four different proteins (kalbi, teriyaki chicken, teriyaki beef, and teriyaki pork).
Regular-sized plates generally come with rice, mac salad or tossed salad, and one other side.
I got the Garlic Chicken plate ($10.26), crispy dark meat pieces of chicken in a savory-sweet garlic sauce, on a bed of rice, with tossed salad. Cucumber kimchi was my side this time, but other options include corn and regular kimchi, among others. 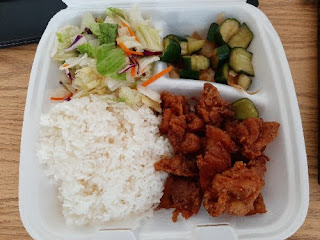 Awesome plate lunch here. Good flavor on the moist chicken, with the garlic not overwhelming. Crunchy cucumber kimchi. I usually eat half and save the other half for later, but I ended up eating the entire portion in one sitting, which pretty much sums up my lack of willpower and the awesome food. 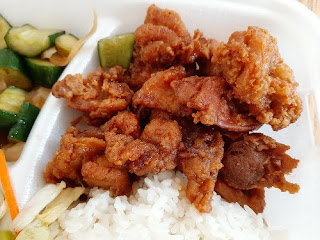 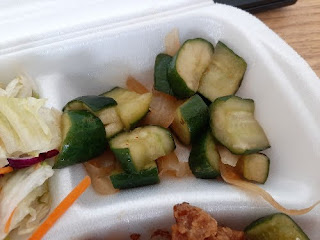 Their breakfast menu is largely Hawaii-American, with examples of the "Hawaii touch" being rice or certain protein choices (spam, Vienna sausage, Portuguese sausage, etc.). You can also get a loco moco for breakfast, which would easily be my go-to during those hours.
There are also daily specials, which Tatsuo's will post to their Facebook and Instagram pages.
Hopefully I'll make a trip down there to dine in after the pandemic ends. For now, a solid thumbs up from me. 7.75/10
Posted by Aaron at 12:00 AM