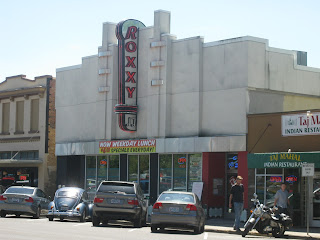 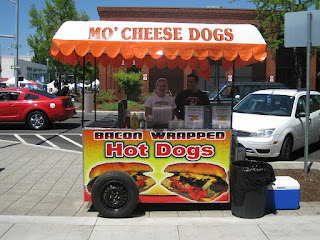 Odd Moe's Pizza has roughly 5-6 locations throughout the Salem-Keizer area. I recently went to the one just off Lancaster Drive NE in Salem.

Melting Pot Candy has a booth at the Saturday Market in Salem, Oregon. Bonnie Andrews is the owner of this establishment, based in Dallas, Oregon. A friendly man named Chris headed the booth on a sunny mid-June day. 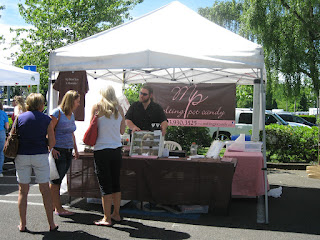 Sugar Lilly is a cupcake booth found at the Saturday Market in Salem, Oregon. I had passed by Sarah's booth several times in the past, just never actually stopping for a cupcake. With my sweet tooth in maximum overdrive on a sunny mid-June day, I figured that was as good a time as any to check it out. 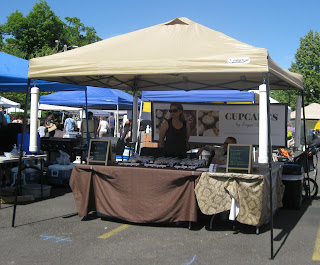 Sip is a juice and smoothie van located on NE Alberta St. in Portland, Oregon. It's a 100% vegan place! Aaron is one of the guys running this location. At the time I went in mid-June, it was only their third week on the block. 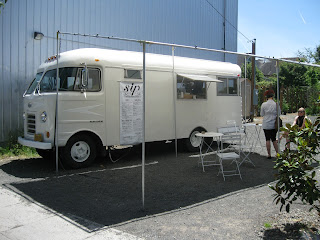 Flying Pie Pizzeria has several locations in Oregon. In mid-June, I met a friend for lunch at the Portland location on SE Stark St. He mentioned it was one of his favorite pizza spots. Who am I to turn down pizza?

Cafe de Crepe is located at the Mississippi Marketplace food pod in Portland, Oregon. Karen and Mink run this cart, which has only been at the pod for a few weeks. They had previously set up shop on SE Belmont.

(UPDATE 11/8/12: Food Carts Portland reports that Homegrown Smoker has closed their original cart at SW 4th and College, but their second cart still remains at the Mississippi Marketplace pod.)

With Homegrown Smoker Vegan BBQ opening a second cart (same menu) at the Green Castle food pod (and soon moving to Mississippi Marketplace), I thought it was a great addition for the area. And then I saw coconut-battered deep-fried Oreos as a special menu item. Panda succumbed to the pressure. Had to get it. 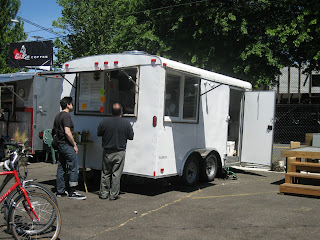 Vivacious (a.k.a. Molly's Vibrant Eats) is a food cart located near the corner of 13th St. SE and McGilchrist St. SE in Salem, Oregon. Molly Frizelle, the chef/owner, opened this cart around mid-May, serving up Korean-fusion tacos and lettuce wraps. The menu looked great, and with very few food carts in Salem overall, it became a must-stop. 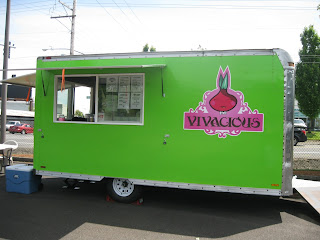 Cart With No Name

Cart With No Name is located at the Good Food Here pod (SE 43rd and Belmont) in Portland, Oregon. Jacki Parks is the owner of the cart. She worked overseas before opening this cart in March. What started out as part-time work quickly developed into a more full-time gig. 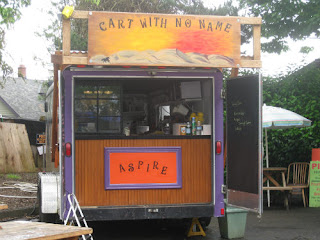 I returned to Herb's Mac & Cheese in early June to satisfy my occasional pasta fix. Herb moved to the Good Food Here pod around April 2012. When I visited his cart last fall, he was still at the D-Street Noshery pod. The cheese sauce that evening was a bit starchy, so how would it fare this time?

(UPDATE 8/24/13: El Taco Yucateco is now near SW 10th and Alder in downtown Portland. Neighbors with Ole Latte Coffee and The Dump Truck!)

El Taco Yucateco is located at the Green Castle food pod (NE 20th and Everett) in Portland, Oregon. Elloy, the chef and owner, had some surprises in store for me when I stopped by in early June.

NOTE: As of  January 2014, this is a Mayan food cart, serving panuchos, tacos, burritos, and tortas.

(UPDATE 10/14/12: Cultured Caveman held their official grand opening of their SECOND cart yesterday! It can be found at SE 41st and Hawthorne in Portland!)

Cultured Caveman is a food cart located at the newly formed Alberta-15 food pod in Portland, Oregon. Heather Hunter and Joe Ban run the cart, which boasts an all-paleo, gluten-free menu. To my knowledge, it's the only paleo food cart in Portland (as of this blog entry). They picked a great first day: May 31, 2012. Not only was it the Alberta-15 pod's grand opening, but Last Thursday on Alberta would attract thousands more that night! 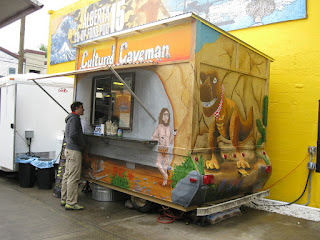 Woodrow's is a food cart currently located near the 4000 block of N Williams Ave. in Portland, Oregon. Shannon is the woman running this cart, which serves breakfast during actual breakfast hours (usually 6-9 a.m.). With most carts choosing to open anywhere from 10 a.m. to noon, this was quite a lovely surprise for me. 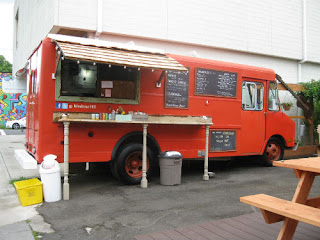 The Egg Carton is located at the Carts on Foster food pod (SE 52nd and Foster) in Portland, Oregon. Sarah Arkwright heads this cart. Her husband, Tim, may also be there for assistance on certain days. With me on one of those all-day breakfast benders, this was the ideal stop. 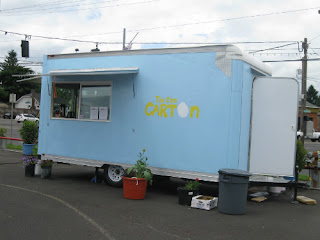 Around late May, I received a message from some of the great people at Happy Campers to review some of their "Wild Buns." With summer now here, people probably would want to get the grill out and have some burgers. I gladly accepted the offer, getting a sample of four gluten-free "Wild Buns" from Zoe at the Lake Oswego Farmers' Market on June 2. 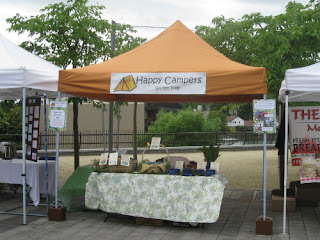 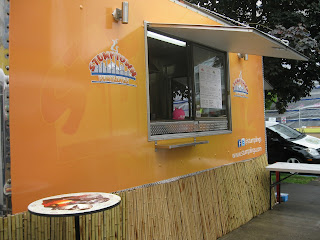 (UPDATE 11/8/12: Food Carts Portland reports that Breakfast Lunch Today has closed, but hopefully it's just for the winter. No official word that the closure is permanent.)

I learned a few months back that Etienne moved his food cart to NE Alberta and 13th, behind the yoga studio and close to where his girlfriend works (at Candybabel, a candy store). I made my visit on May 31, one that was long overdue. I had also seen him at Eat Mobile, but was still too full from my immense challenge at Flyin' Hawaiian to fully enjoy the festivities. In a smart panda move, I came hungry this time. 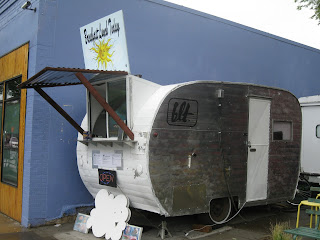 Tito's Burritos has two food carts in downtown Portland. The original spot -- which I went to -- is near the corner of SW 3rd and Washington. Their second cart makes its home on SW Alder, in between 9th and 10th Ave.

Don Pedro is a Mexican food cart located on SW 5th Ave., in between Stark and Oak, in downtown Portland, Oregon. They are still a fairly new cart, having opened a few weeks ago. 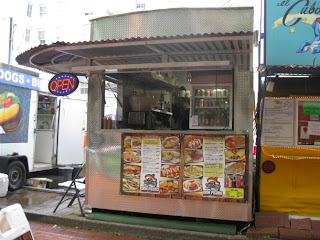 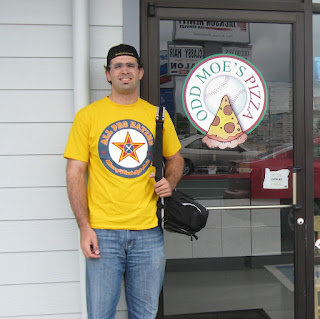 NOTE: This is the second of a four-part series chronicling OregonMania, where two guys basically ate a bunch of food in Oregon over Memorial Day weekend.

Day 2 of OregonMania took us to Portland. While our original plans quickly got shot down, we still made the most of our eating odyssey.

NOTE: This is the first of a four-part series chronicling OregonMania, where two guys basically ate a bunch of food in Oregon over Memorial Day weekend.

Friday, May 25, 2012, was the first day of OregonMania, a multi-day event with professional eater Naader Reda. You may have seen Naader on the Pacific Coast Highway episode of "Man v.Food Nation," where he ate the 4-pound Brahma Bull tri-tip sandwich. 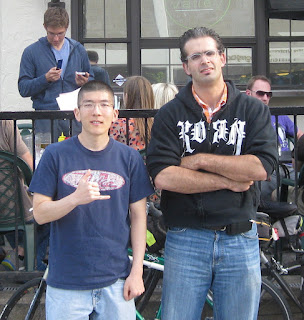 (NOTE: Over the last month, I got a chance to meet a couple of professional eaters. Today's entry highlights Randy "Atlas" Santel. Tomorrow, a four-part series chronicling "OregonMania" with Naader Reda commences.)

Late April and early May was an exciting time for yours truly. After learning I actually passed the Washington Bar Exam, I made preparations to head to Washington to watch Randy "Atlas" Santel conquer some food challenges. Randy set out to conquer six challenges in three days. While I wouldn't be on hand for all of them, I still wanted to meet this larger-than-life athlete. 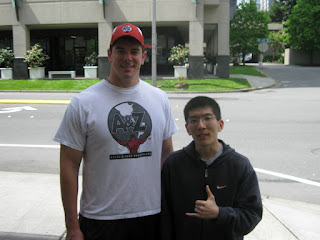 From tomorrow (6/5) until Saturday (6/9), I will devote my blog posts to two professional eaters I met last month.

Tuesday's post will be about Randy Santel, who tackled several food challenges in Washington during the first weekend in May. I only got to see two of his six food challenges that weekend, but the guy can really put away the grub. Very nice guy, and I hope to meet up with him again in the future.

From Wednesday through Saturday, I document a four-part "OregonMania" series with Naader Reda, who you may have seen on the Pacific Coast Highway episode of Man v. Food Nation last year. During a four-day stretch over Memorial Day weekend, Naader went to town on quantity challenges, while I played the stupid panda role and ate a lot of spicy stuff.

Plans are already in the works for "OregonMania II," perhaps later this summer.

In a way, this will also provide a small break for me from a food noshing standpoint. In addition to doing my usual reviews and tackling bizarre spicy stunts during OregonMania, I've been writing food articles for Serious Eats in an attempt to further get my name out there in the food writers' world. I've also been applying for legal jobs throughout the Pacific Northwest. Baby steps....

Hungry Heart Cupcakes has a kiosk set up under the eating tent at the Mississippi Marketplace food pod (Portland, Oregon). Jax runs this cart, making sure to use fresh ingredients just about every day. 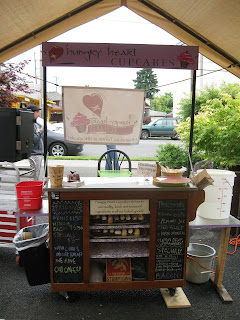 My initial visit left a very positive impression, one that I wanted to let my mother experience. She came up to Oregon to visit for a week, and for her last big meal here for the foreseeable future, I thought it was a good idea to bring her here -- even if just to show there are great places to eat around my neck of the woods. 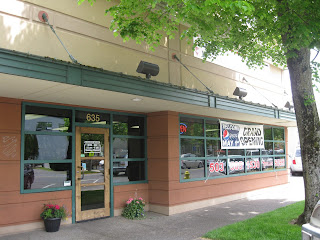 Lonchera Brother Express is a Mexican food bus located at the Cartlandia food pod in Portland, Oregon. This place somehow eluded my reviews for a long time, even though they had been parked at Cartlandia for eons. That finally changed one May evening. 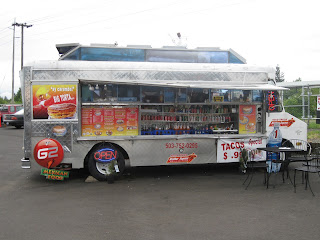