Tito's Burritos has two food carts in downtown Portland. The original spot -- which I went to -- is near the corner of SW 3rd and Washington. Their second cart makes its home on SW Alder, in between 9th and 10th Ave.

In what seems to be a never-ending quest for a great breakfast burrito from a Mexican food cart, Tito's was next on the list. I stared at the menu for a while before ordering the #1: potatoes, eggs, ham, bell peppers, and melted cheese. Yeah, I said bell peppers. Haven't seen many of those in breakfast burritos! 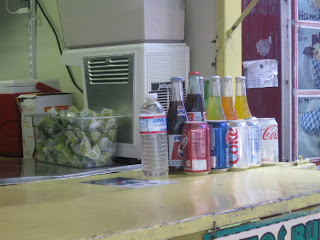 Now this was delicious. The bell peppers (red and green) made this one extremely colorful and added another flavor dimension previous breakfast burritos (from other carts) didn't have. I'm not sure if beans were mistakenly added to my burrito. Whatever the case, it was a flavorful filling that fully united. Whoa, try saying that three times fast. Tongue-twisting panda....

It came with two types of hot sauces (red and green), plus a lime wedge. I actually detected a bit of zip in that green concoction. Despite looking angrier, that red sauce didn't have as big an impact on my tongue.

I stopped by the second Tito's cart just to snap a couple of photos. 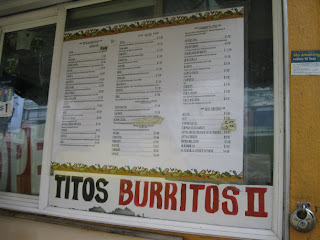 Tito's has your usual tacos, burritos, tortas, side dishes, and combo plates. All possess very reasonable price tags. And after downing that palate-pleasing burrito, I'm a huge fan of this cart! One day, I shall return for more! 8.5/10
Posted by Aaron at 11:00 PM