As one of those warmup acts -- the undercard, if you will -- that really doesn't get much attention, I decided on a small spicy pizza with two spiced-up drinks. I kept the drink portion confidential from people (even Naader) until mere minutes before the challenge began. No dairy relief here, fellas.

Demitri wanted me to take down a regular (18") spicy and meaty pizza. Hell no. The spice was gonna be enough of a challenge. I went light on the toppings, picking Canadian bacon and pineapple. The "pizza sauce" was instead a puree of deep-fried habaneros and ghost pepper powder. On top, more ghost pepper powder, plus my Four Horsemen of sauces:

My two drinks, Powerade and lukewarm coffee, also got the gamut of sauces, plus more ghost pepper powder. 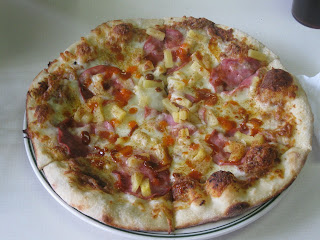 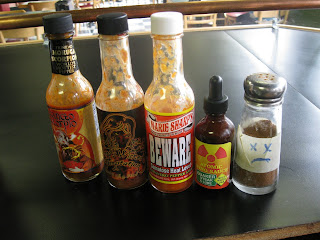 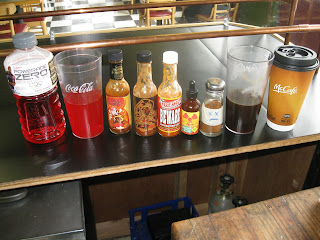 In a nutshell, it was very painful. As in big ouch. By slice #4 of the six-sliced pie, my mouth was ablaze. Easily the worst pain I felt since completing the Marine Burger at Killer Burger last May. I kept motioning to Demitri for more water, consuming several full glasses before it was all said and done. I lost count around four glasses. Mind you, I still hadn't drank the coffee and Powerade.

Ultimately, I powered through the pizza by the 14-minute mark. The drinks didn't make my mouth get any worse, but obviously didn't make it any better. Predictably, they didn't taste very good.

Around 18 minutes, it was over. All gone. My stomach was a bloated Chernobyl mess. Not a happy panda.

Bonus video of me taking down that spicy pizza and two spicy drinks!


No crowd for me, other than the Freak and the Church St. Pizza staff. Sometimes, it's nice to be the undercard instead of the main attraction. I wouldn't be touching super spicy food for a while after that.
___________________

I got to see Naader's monstrous pizza get made. Four types of toppings for this 28" pie: supreme, veggie, Royal Hawaiian, and the "Stryker" (all-meat). It looked and smelled awesome. Over three pounds of dough, and almost 3.5 pounds of cheese. Around a combined 5.5 lbs of sauce and toppings. Basically, a legit 12 lbs. Many pictures would follow. 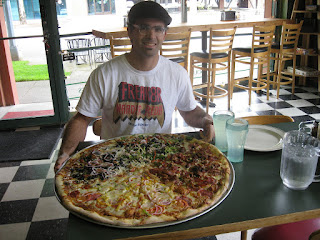 If Naader finished it by himself in 90 minutes, the pizza was free. Otherwise, $100 out of Freak8R's pocket.

Kelly from the Statesman Journal briefly stopped by before the start of the challenge. Naader started with a torrid pace, taking out half the pizza in 12 minutes. Yeah, he ate the equivalent of two medium pizzas in that time frame. In a smart move, Naader tackled the heaviest choices first (combo and Stryker). 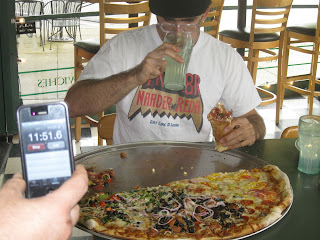 As one would expect, the Freak slowed down considerably after that. Bites were fewer and farther between. The cheese was hardening. Fortunately, having four quadrants of pizza may have prevented full-on flavor fatigue. 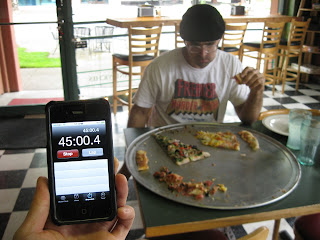 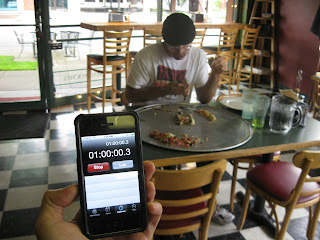 Kelly returned an hour later, with Naader down to a couple slices and topping scraps. Someone requested that "The Final Countdown" play during the last few bites. Demitri got that going on the sound system. As Naader chomped on the final bite around the 73-minute mark, he raised the large 28" circular pan in victory. Appropriately, "We are the Champions" started playing. 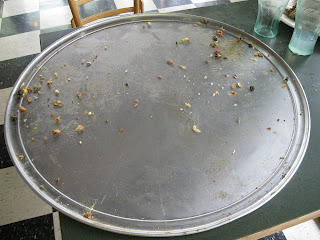 Kelly asked questions and jotted quotes from several of us during this time. She also captured the last two minutes of video, which eventually also made its way on the Statesman Journal website.

Salem may be Oregon's capital, but it normally doesn't have a ton of big news. Naader's feat easily became the most popular article on the Statesman Journal website the next day. He even got a front-page mention, with the rest of the story a couple pages in. In a moment that made a few of us chuckle, the rest of the story got put next to the obituaries. Yeah, that's a sign. Don't OD on pizza, folks.
___________________

I created two highlight videos for your viewing pleasure (maybe not a lot of emphasis on "pleasure," though). One shows Naader's reign of terror, while the other shows some of the stunts I did during that weekend.

Shortly thereafter, it was time for Naader and I to part ways. He had to return his rental car and catch his flight home. Work awaited him the next morning.

It was an honor to meet yet another big eater and a great friend. Whether I get down to Southern California or he returns to Oregon, I hope to see him again very soon.

Rumors are already stirring of OregonMania II occurring as early as July. As in next month. It's by no means confirmed, but it would be a great encore to what transpired over this four-day demolition.
Posted by Aaron at 11:30 PM