NOTE: This is the second of a four-part series chronicling OregonMania, where two guys basically ate a bunch of food in Oregon over Memorial Day weekend.

Day 2 of OregonMania took us to Portland. While our original plans quickly got shot down, we still made the most of our eating odyssey.

Naader and I initially intended to meet up at Mad Greek Deli around noon. After that seven-pound chicken dinner at China Blue the previous night, I wanted to give him all the time he wanted to recover. I ultimately ended up at some food carts in Portland. Got a few bites to eat, then went on my merry way.

I contemplated going to the Green Castle food pod at the corner of NE 20th and Everett, but figured if Naader was making good time getting to Portland, I didn't want to keep him waiting. He arrived at Mad Greek Deli a bit after noon. Unfortunately, we were disappointed to learn one needs reservations at least a day in advance to attempt the challenge: eating a large mad Greek sandwich, a pound of Greek fries, and a 32 oz. soda in one hour. Despite trying to negotiate other ways for "Freak8R" to take the challenge that day, it was futile. If anything, it's a good way for Naader to come back to Oregon and vanquish this beast.

We headed to the Green Castle pod anyway, and I feasted on a mocha and a scone from Ole Latte Coffee. A great food cart, I must say. Because this trip needed some spice, I poured my hot sauces (conveniently kept in my bag) over my scone and devoured it. I'm sure the owner (Todd) thought I went insane. 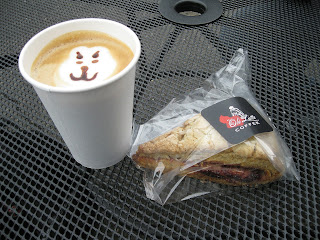 We walked to the second location of Voodoo Doughnut on NE Davis. It's the same one that Adam Richman visited on the Portland (Oregon) episode of Man v. Food. Naader got a Tex-Ass doughnut (a near-one pound fluffy monster), while I purchased the infamous voodoo doll doughnut.

Naader dispatched the doughnut in a bit over two minutes, no liquids. Then I channeled the spicy panda again, dumping a ton of hot sauce (including extract) onto my doughnut. Yum. Gone in less than two minutes. 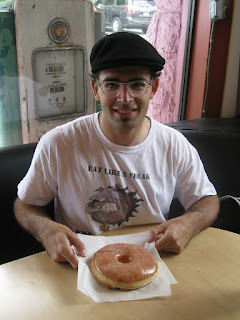 While we filmed my segment, I could sense we were being watched. Out of the corner of my eye, I sensed three girls staring at what we were doing. Not sure whether they were disgusted (probably) or in disbelief (also probable).

In what was likely one of those egotistical moments, I instinctively grabbed my extract sauce (about 2 million scoville units, so not the worst thing ever), and sent some down the hatch. Yeah, way to go. That'll really get any attractive women to consider dating you. (Not.)

Naader and I gave them our business cards, so hopefully they will also pass on word of our "talents" to others that may actually enjoy seeing our freakish side.
__________________

With Mad Greek no longer on the docket, we drove to The Original in downtown Portland. Naader's "streak" of challenge wins faced the five-pound poutine challenge. Presented on a butcher's block, Reda had 30 minutes to take it down. 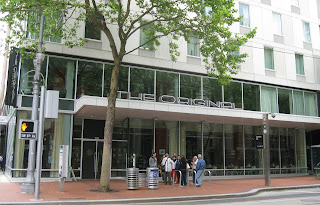 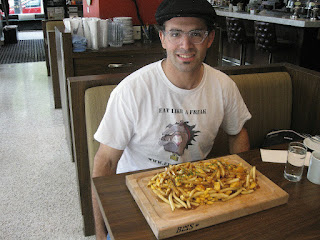 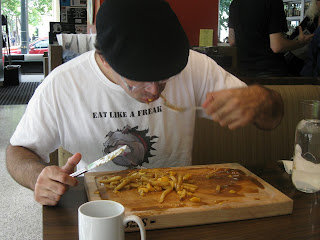 Pbbft. No contest. Freak8R wins by TKO. Done in less than 10 minutes. Looked mighty tasty. I promised Naader I would give that a go with my friends in the future.

We found it funny later that the servers forgot to get Naader to sign a waiver for the challenge and actually stopped him during the middle of the challenge. At the time, though, I thought they should have waited until later, if at all, to give that to him.

Meanwhile, it was a scoop of Gary's Spicy Peanut ice cream for me. True to Spicochist form, it was another dousing of hot sauce that made a few of the servers there shake their head at me. But hey, it really went well with the peanut ice cream. It upped the spice, yet kept the heat neutralized. Just one of the weirdest (but coolest) "add spice" moments I've had yet. 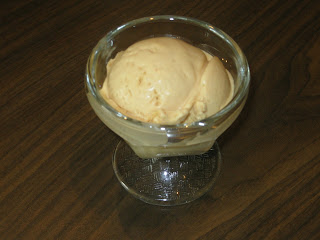 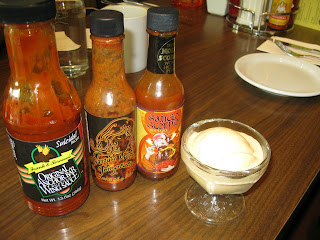 To round out our Portland adventure, we headed to Salt & Straw's newest location on NW 23rd Ave. I recently completed an article on them, posted on the Serious Eats website. We tried constructing an ice cream challenge there, but they declined, citing they were just too busy with other business matters at that time. It's a valid reason. Perhaps it could work out next time. 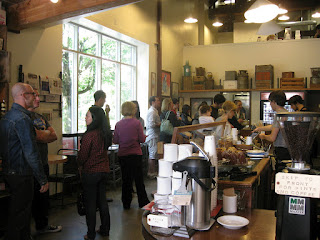 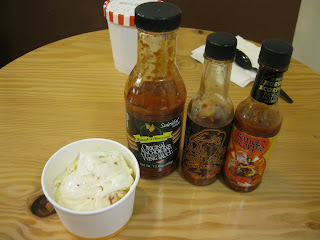 Naader wanted to try the Sweet Heat Apricot ice cream with the candied Scotch Bonnet peppers. It was a seasonal flavor just for the month of May. A pint of the ice cream would suffice. I got a hefty scoop of the same ice cream. Another quick dispatch for Freak8R, roughly five minutes.

That was a wrap for Day #2. I drove Naader back to his car and we went our separate ways. Activities for the next two days kept things in Salem, so thankfully, no long driving days. While Naader took a more "relaxing" Day #3 (to prepare for the main event on Day #4), both Salem days were made to test the Spicochist....
Posted by Aaron at 11:30 PM