I returned to Herb's Mac & Cheese in early June to satisfy my occasional pasta fix. Herb moved to the Good Food Here pod around April 2012. When I visited his cart last fall, he was still at the D-Street Noshery pod. The cheese sauce that evening was a bit starchy, so how would it fare this time?

With hundreds of combinations staring at me in the face, I literally pondered this one for several minutes. The scrumptious specials only made the choice harder, but that's a good thing, right?

Ultimately, my stomach wanted a lighter option, so I got "Miss Piggy's Favorite" special mac with spinach, fresh garlic, sundried tomatoes, and feta. Seven bucks for a regular, $11 for a double.

Wow, what can I say? The cheese sauce was phenomenal. No starchy feel to it, just a creamy, addictive binding agent that blanketed perfectly cooked pasta. Each topping shone through wonderfully, a killer good vegetarian meal.

Occasionally, Herb will have a vegan sauce using tofu and nutritional yeast, among other ingredients. Even he admits it was more popular than he thought it would be. And apparently, it's amazing with bacon. Not surprised....

While I enjoyed my meal, I struck up a conversation with Bode, a student studying philosophy in Boston (visiting friends in Portland). He was born in San Francisco and seems to prefer the West Coast. Two completely different ends of the country, that's for sure. He had gotten a meal from the nearby Namu food cart (Korean-Hawaiian meals). Nice guy, and I wish him well on his studies. 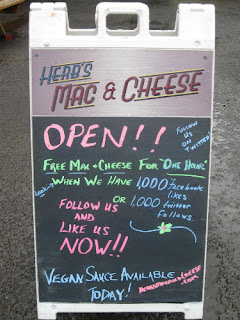