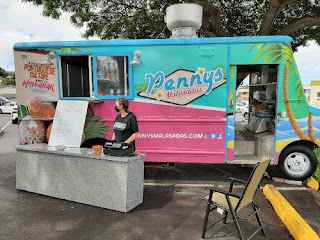 About a week ago, I noticed Penny's malasada truck parked in the Aiea Shopping Center, on the bottom floor where Times Supermarket is.
Penny's is a roughly three-year-old company. They have set up the Hukilau Marketplace at Polynesian Cultural Center and at Schofield Barracks. They likely will keep one location around Hauula/Laie area, as far as I know.
The menu is fairly straightforward, traditional malasadas and filled malasadas. For those wondering, malasadas are pillowy Portuguese doughnuts covered in granulated sugar. Traditional ones are not filled. Penny's will rotate different flavors for the filled malasadas, so it's probably best to look for updates on their social media. They mainly use Instagram and Facebook. 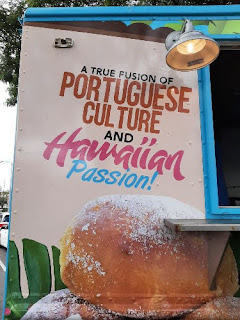 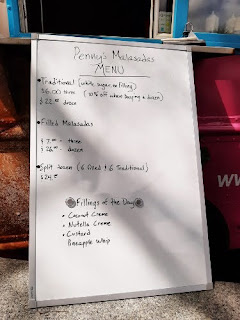 My parents and I wanted to try different filled malasadas, so we got a basket of three ($7). Malasadas were delicious, pillowy, and cooked perfectly. 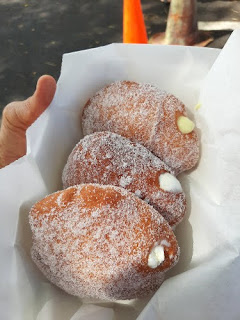 Custard was on the thinner side, but perhaps the hot malasada itself may have thinned the custard out a bit. There also wasn't a lot of filling inside, unfortunately.
Coconut creme was a hit. Coconut is subtly there, not too sweet. Lots of filling in this one.
My personal favorite (so far) is pineapple whip. Pineapple likely strained out - no fibrous texture - with proper balance of sweet and tart. Refreshing and delicious.
I also briefly inquired about their advertised malasada challenge. Scanning social media, it appears to have gone through a few rule changes over the years. Early posts and articles had the challenge as 12 malasadas in three minutes, then later posts made it six malasadas in three minutes. Now it's six traditional malasadas in two minutes.
I did not ask if it was free if finished, but the prize otherwise is free malasadas for a year, where they will probably allow one free malasada every day during that time. I also forgot to ask about the price, which looks to be around $12 based on the menu. Roughly 65 people have tried the challenge so far, with approximately 7-8 winners. 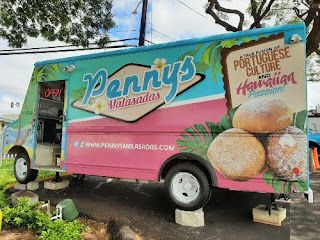 If you see Penny's Malasadas, stop and give them a try. General hours can be Thursday through Sunday from 9-3, but this can vary, so keep monitoring their social media for the latest. 9/10
Posted by Aaron at 12:00 AM