Breakside Brewery now has three locations in and around Portland, Oregon. This blog post covers the newest location, on NW 22nd in between Quimby and Raleigh. 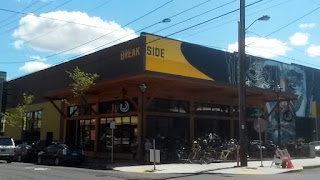 After news first broke in late 2015 of Breakside's third location, Breakside NW opened in March 2017 and dubbed the Hop Lab. It is mainly devoted to experimental beers or other unique Breakside brews. While the Dekum and Milwaukie spots will retain the usual core beers or seasonals, Slabtown will be the epicenter of experimentation. As the nickname indicates, expect a bunch of IPAs and other hoppy releases.

Hop Lab has three floors. Especially on the third floor, you can actually see the large vats of beer while ordering at the bar up there. In fact, some of the taps originate from those vats, meaning that you'll be getting the freshest beer possible. I don't know of any other location or brewery that does that.

In early May, I got to try a few special Breakside IPAs. 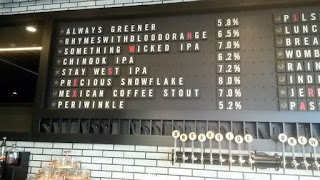 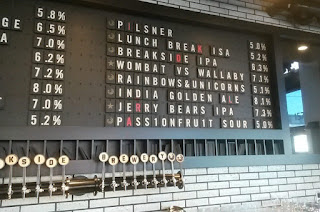 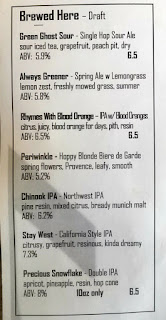 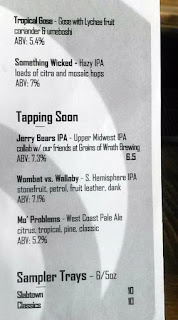 Jerry Bear IPA was a collaboration between breakside and Grains of Wrath Brewing. GoW will open in Camas this summer, started by guys from Fathead's Brewing in Portland. 7.3% ABV. This IPA was more hazy than the other IPAs I had, with good tropical, some malt, and creaminess on the tongue. Probably close to a 4 out of 5 if I had to rate it. 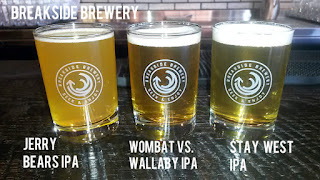 Wombat vs. Wallaby IPA is a Breakside IPA using hops from the Southern Hemisphere (Australia and new Zealand). 7.1% ABV. More sweet tropical, some malt again, with perhaps a pilsner-like taste about halfway into the drinking experience. Fairly solid, probably somewhere in the 3.8 out of 5 range.

Stay West IPA is another Breakside IPA in its experimental stages. Mainly tropical grapefruit and citrus with hoppy West Coast-style qualities. Yet, the bitterness is kept in check so you can still experience all that wonderful flavor. I preferred this one by far, and my weighted rating likely would have checked in around 4.25 to 4.3 (out of 5).

Word on the street is that Breakside plans to make Stay West a year-round beer, and perhaps the first Breakside beer to come in 6-packs. I really would love the 6-pack idea; while I like 22 oz bombers, I generally limit myself to a pint when at home, so I normally re-cap what's left and drink it the next day.

My friend enjoyed the Breakside Mexican Coffee Stout, so I had to sample it. I also thought it was awesome. Nice coffee experience, with cinnamon. Fairly full-bodied. Explosion of flavors. 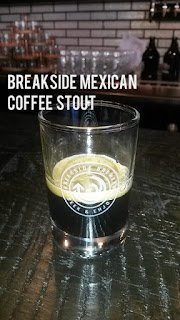 Naturally, I had to get some food while here. The food menu has burgers, sandwiches, salads, and some main dinner entrees.

I got the Chicken Sandwich ($13): chicken breast, bacon, Swiss, guacamole, and chipotle sauce on a brioche bun. Tomato, greens, and onions in there as well, and two dill pickle strips on the side. It comes with choice of potato salad or curly fries, and I wanted the fries this time. 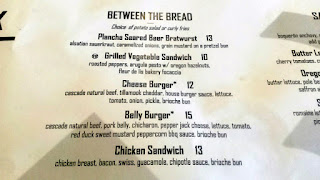 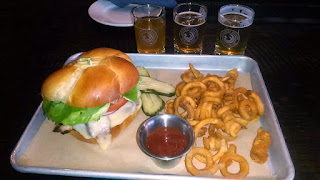 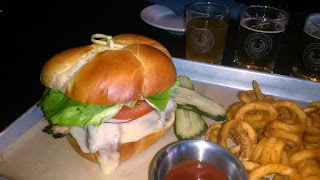 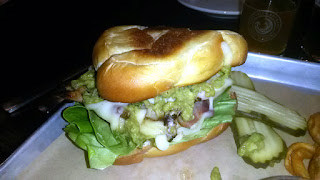 It's a hefty sandwich for sure, so hopefully you'll be able to unhinge your jaw to fit it in your mouth. Lots of chicken to satisfy your protein cravings. I would have liked some more bacon in there, maybe 1-2 strips in there. With a lot of sandwich components in there, even the bacon tended to get lost in the shuffle.

Huge thumbs up for the curly fries. Reminded me of my late-night Jack in the Box cravings. Crispy, seasoned well. I was told it was Red Duck ketchup on the side, another tasty local product.

Parking can be an adventure in the area. It will likely be street parking, and you may need to park a few blocks away, depending on your luck and the time you arrive.

If you're in the mood to try some Breakside brews found nowhere else, head to their Slabtown location! 8.75/10
Posted by Aaron at 11:00 PM