On February 23, 2018, I headed to EastBurn (appropriately on E Burnside in Portland, Oregon) for their Founders Solid Gold Release Party. 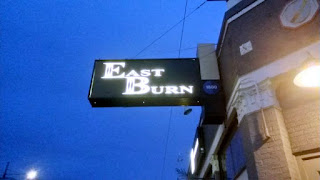 Sure, there was a threat of snow in the air on this day, but the panda took his chances anyway. (Sorta spoiler alert: I got home just fine and no snow fell).

The release party was downstairs. All eight taps featured Founders beers, from their Red Rye IPA to their critically acclaimed Canadian Breakfast Stout. I wanted to get a shot of the taplist, but my camera phone is a dinosaur idiot and hates low light.

While the party was to feature the release of their Solid Gold lager, I set my sights on the CBS, because that beer is simply awesome. It may have been a hefty $9 for a 10 oz glass, but the panda regrets nothing with this beer. Lots of roasted malts, with the beer aged in bourbon barrels that previously held maple syrup. 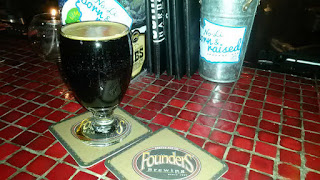 EastBurn had some specials for the event as well. I had to try their Scotch Pasty ($15), a baked pastry filled with house-ground steak rendered in Founders CBS beer, carrots, Yukon gold potatoes, celery, and onions. There was lowland gravy on the side. While the gravy itself could have been heated a little more, the pasty was great; flaky pastry, with perfectly cooked veggies and meat.

And of course, my phone is horrific in dark/low light. Flash photos basically drained my phone camera battery, so I got one good shot of the beer (above) and a crappy shot of the pasty. Semi-sad panda, but it probably shows where my picture priorities lie. 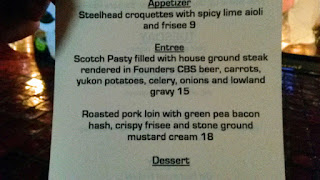 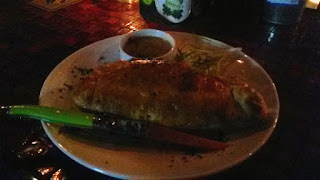 I got there at the start, when the event was more low-key. The area may have gotten more crowded after I left.

The regular EastBurn menu has some excellent choices as well. I probably would be leaning towards the Brussels Sprouts and the Bacon Cheeseburger otherwise; that will need to be saved for my next visit. 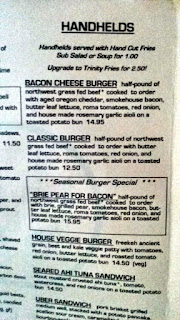 If you're around 18th and Burnside in Portland, check out EastBurn for some good food and awesome beer. 7.5/10
Posted by Aaron at 12:00 AM