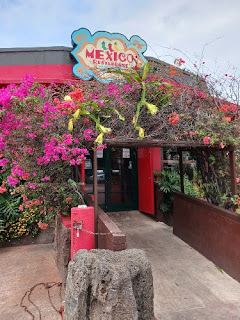 I recently celebrated another trip around the sun, and after not having Mexican food for a while (Taco Bell doesn't count), my parents and I decided on Mexico Restaurant. My mom's friend's husband loves this place, so figure why not try for science?
We had a seat near the front, next to a blasting air conditioner. Lots on the wall, such as stuffed game animals. Cholula and Tapatio at our table. 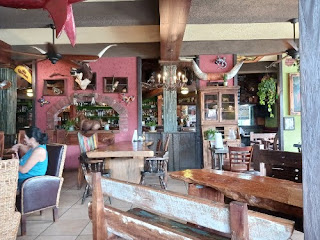 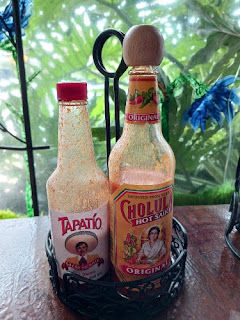 Our server started us with free salsa and chips. I'm a fan of loading up on this and taking a bit of the main dish home, more bang of your buck this way. 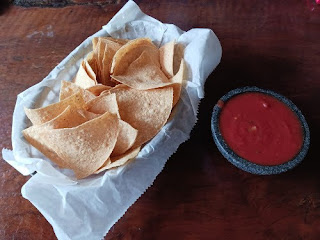 There are several different margaritas on the menu. I also got a frozen lime margarita ($12), coming in the typical large glass. Pretty good, certainly didn't hold back on the tequila and triple sec. I usually don't need salt on the rim for mine. Had the day been cooler, I'd have otherwise gotten the regular version. 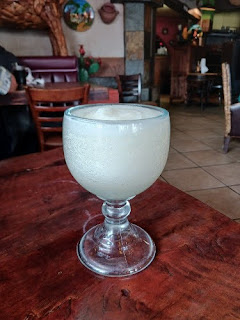 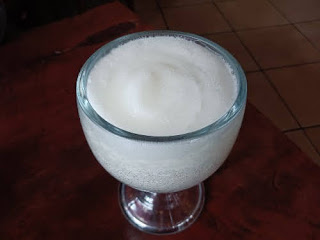 My parents split the Chicken Fajita Burrito ($19). It had chicken, bell peppers, beans, cheese, salsa fresca, and onions. Side of Spanish rice and refried beans, sour cream, and salsa verde. My folks, who are already small eaters, looked at this gordo burrito and wanted me to eat the last one-third. I think the filling - namely the chicken - could have used a bit more flavor. Maybe even a bit more sauce on the inside too, since it was a bit dry. Still, finishing this gave me more of an excuse to take some of my main dish home. 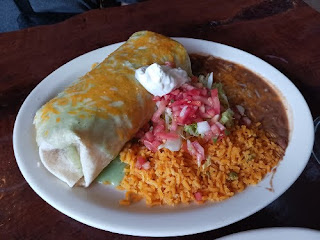 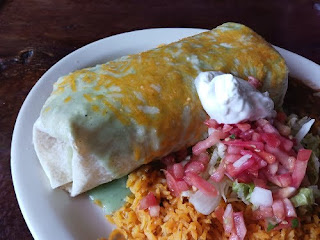 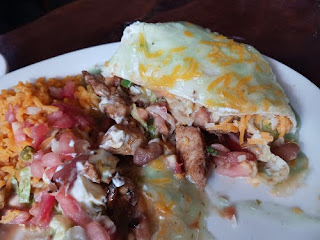 I got the Camarones Diablo Plate ($28). Several jumbo tail-on shrimp topped with a red sauce. It's served with a papaya salsa, guacamole, Spanish rice, and black beans. Excellent guacamole and I just had a few shrimp while finishing my parents' burrito. Shrimp were cooked well, juicy and tender. At first I thought the sauce was much sweeter, but as I ate more, the spice became more noticeable. Pricey dish, but very good overall.
I also ate the parents' leftover burrito there because I figured the shrimp would hold up better as leftovers anyway. Confirmed the day after that it did hold up well. 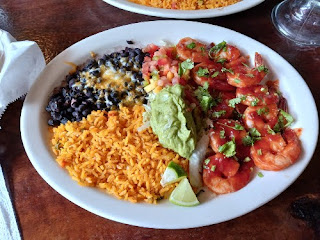 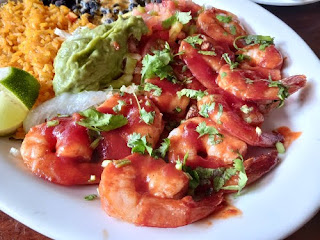 Either way, it didn't take me long to realize that I can't eat a lot anymore, either. I eventually waddled back to the car in a daze, and additional walking temporarily helped before I decided to collapse in a lazy panda heap back home.
Overall, a great experience. We went for lunch on a Tuesday, so perhaps that's why there were a bunch of parking stalls and pretty quick service. I'd love to go back to try other dishes. 7.75/10
Posted by Aaron at 12:00 AM