Gyros N Villains is a food truck found at multiple spots throughout the week. On a Tuesday, I spotted the truck near the 800 block of Cooke Street in downtown Honolulu, Hawaii. 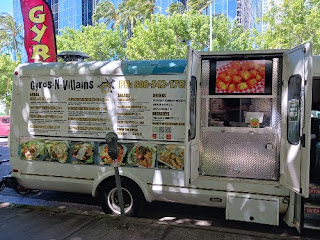 I work around downtown on Tuesdays, and having passed by this truck multiple times before, I finally decided to try this place out. I've never seen an old Handi-Van turned into a food truck, but this one is just that.
A pun on "Heroes and Villains", this truck specializes in gyros. While the classic version and its deluxe counterpart are there, this truck also has chicken gyro variations and a vegetarian option. 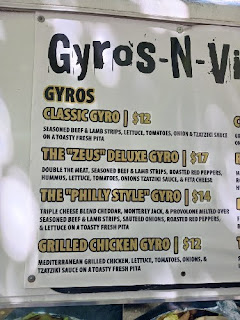 I got the "Zeus" Deluxe Gyro ($17). This has double meat (lamb-beef combo), with roasted red peppers, hummus, lettuce, tomatoes, ontions, tzatziki, and feta. To compare, the regular classic has only a single portion of meat, and doesn't have hummus, red peppers, and feta. 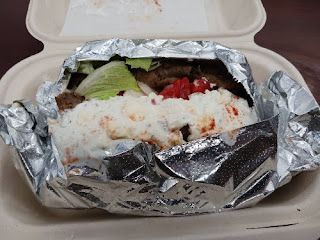 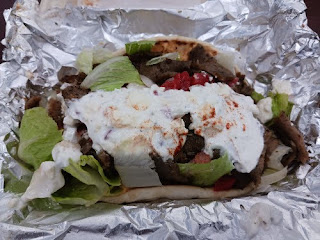 Now I really wonder why it look me so long to try this place, because it was a delicious gyro. Tons of juicy meat strips made for an excellent portion. Fresh veggies. Warm, toasted pita. Since it was such a big gyro, I'm happy they also gave me a fork. It was best to eat some meat and veggies before trying to pick the entire thing up. But hey, I'm not complaining at all.
While the Zeus is $5 more than the classic, it's well worth the extra money. I think the roasted peppers, hummus, and feta add more flavor layers to the gyro. 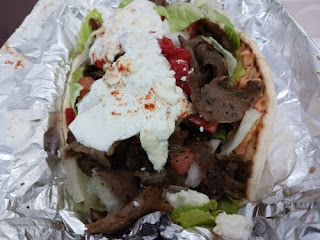 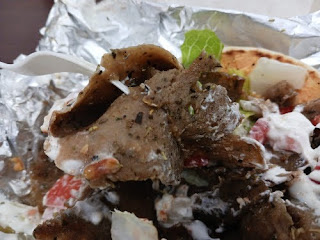 Even during lunch, there's several food spots in the area, so it was a short line on a Tuesday. I got my order in under 10 minutes, not bad.
Their Instagram usually posts the schedule in their bio. As of October 2022, they are at Mother Waldron Park (Kakaako) on Mon and Wed; Cooke Street on Tue and Thu, and near Straub hospital on Fri.
If you see the Gyros N Villains food truck, check them out. 8.75/10
Posted by Aaron at 12:00 AM