Dos Jefes is a roaming food truck located in Honolulu, Hawaii. I spotted this truck on a Tuesday, when they parked between the 800 and 900 blocks of Cooke Street. 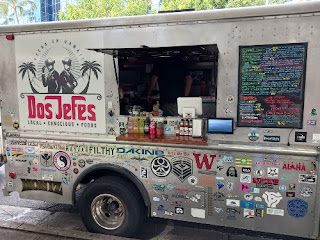 My coworkers and I have passed by this truck on our lunch break for a few months, and we finally decided to try it out.
According to their Facebook page, Dos Jefes is a craft taco company started by two guys, Matt and Collin. They were featured in a Honolulu Star-Advertiser article nearly a year ago. Dos Jefes has its roots operating out of Paradise Ciders' tasting room, but eventually the owners got a food truck and took their show regularly on the road.
They also make their tortillas from scratch, an added bonus. Their dishes either use a 5" white corn tortilla or a 6" flour tortilla.
The menu usually has 4-5 different tacos, which even includes a Cauliflower Taco to grab the vegetarian/vegan crowd. Their signature is the Birria Taco ($14), where you'll get two tacos with lots of meat, with cheese, cilantro, onion, and a side of the signature consomme. 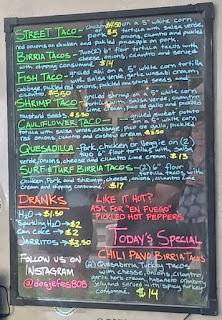 But since it's Thanksgiving time (we went a couple days before Turkey Day), Turkey Birria Tacos were a special. For $14, you'll get two Chili Pavo Birria Tacos. The 6" flour tortillas contain lots of chopped turkey, with cheese, onions, cilantro, and garlic herb cream. Habanero cranberry jelly is served on the side, and there's even a special spicy turkey consomme that goes with it.
If you want some pickled hot peppers, just mention you'd like it "en fuego". Looked like some serranos or jalapeños, plus a few habanero slices. 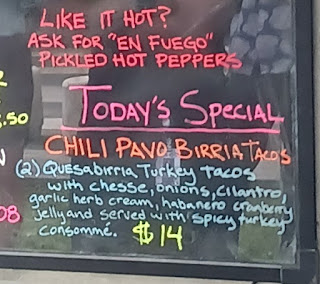 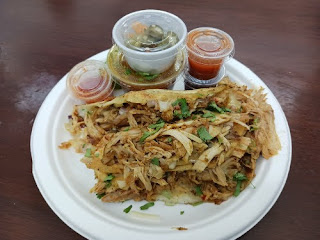 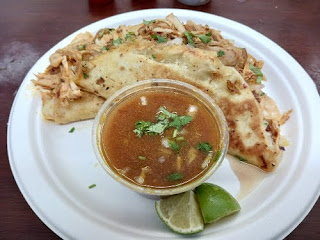 Outstanding Turkey Birria Tacos. Smart to use dark meat here for extra flavor, and everything worked in harmony. Also a nice move to put the cranberry jelly on the side. I didn't get much heat from the jelly or the consomme, but maybe it's because I was burning my face with all the other peppers and hot sauce. 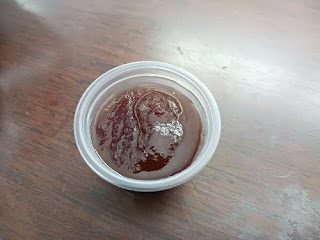 Amazing consomme, and I'm sure many customers have ended up drinking it as soup. I may or may not have done the same.
One minor quality control issue...I got a couple of small bones in my turkey tacos.
Dos Jefes even has their own line of hot sauces, ranging from the mild salsa verde to a reaper hot sauce. The hottest offering, Gringo's Nightmare, adds pepper extract to their reaper hot sauce. I tried their Haole Medium and Reaper sauces, both vinegar-based and delicious. The acidity cuts wonderfully through the richness of the taco. 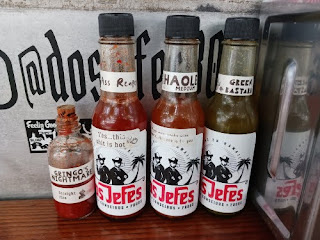 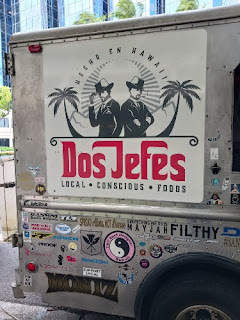 Dos Jefes are open Tue, Thu, and Sat. Tuesdays is on Cooke between Kapiolani and Kawaiaha'o. On Thursdays, they're in downtown by Cooke and Bishop. On Saturdays, it's usually Triangle Park. They also regularly post on Instagram.
These guys are the real deal. Amazing food. Please check them out if you spot their truck! 9.25/10
Posted by Aaron at 12:00 AM