Bogart's Bar is located near the corner of Beatty and Robson in downtown Vancouver, British Columbia, Canada. 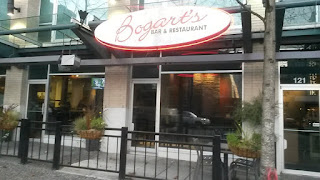 I walked around in downtown Vancouver (Canada) on U.S. Thanksgiving Day, looking for great food and beer while watching the NFL games on TV. Bogart's Bar appeared to deliver on all fronts. I took a seat at the bar area during their happy hour.

I started with a pint of Driftwood Fat Tug IPA ($4 during happy hour), which has scored high on sites like RateBeer (99 overall) and BeerAdvocate (95 overall, "world-class"). I totally agree. Such a well-balanced IPA, and for 7%, it goes down amazingly smooth, even though it clocks in at over 80 IBUs. I would love to bring home a couple 22 oz bottles of this. 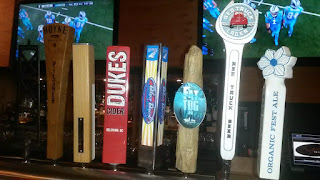 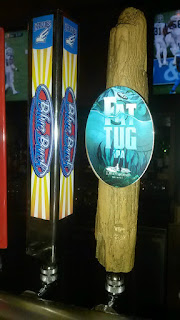 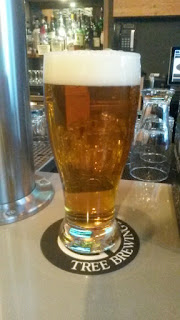 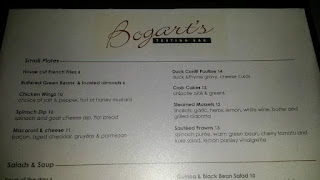 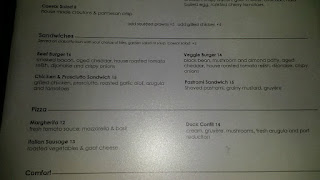 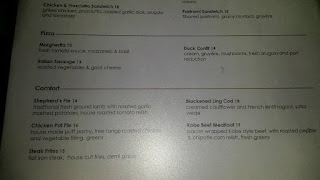 While all the toppings delivered as promised, I also give props on the awesome flatbread, which had a bit of crunch, slight chew, and a lovely lightness. I personally haven't had duck confit very much, and to have it on a pizza was nothing short of genius. 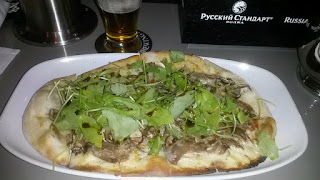 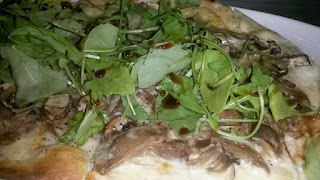 Bogart's has a handful of beers on draft, plus a cider. For food, I'd also give the sandwiches and appetizers a look. Trust me, it was tough to choose between the Duck Confit Pizza and the Duck Confit Poutine. Perhaps the latter will be ordered on a future visit.

Very good service and a front-row seat for the football game. Coming at happy hour (about 4 PM) was a fairly wise move, no line and surprisingly almost empty. Not sure if this is a hidden gem or if I just arrived before the huge rush. Either way, I highly recommend this place if you're in downtown Vancouver BC. 9/10
Posted by Aaron at 12:00 AM