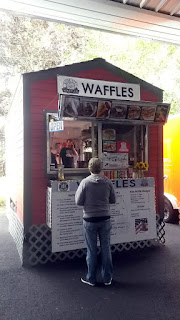 Another new food cart has popped up in this rather popular food pod. After hearing Melody (the founder of this cart) on Steven Shomler's radio show a few Tuesdays ago, I had to head over and try this cart out.

There are 11 main choices, with a separate kid's menu. While most of the options are actually waffles, the one item I did pick was waffle only in shape. 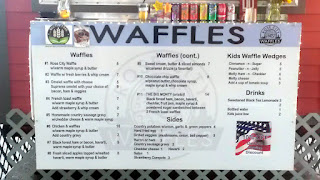 Yup, there's an Omelet Waffle here. As in eggs cooked in a waffle maker. You can get a cheese omelet waffle for $5, or the supreme omelet for $9 (choice of ham or bacon with veggies). This option was too good to pass up, as I had never before heard of an omelet made this way. But it's genius. 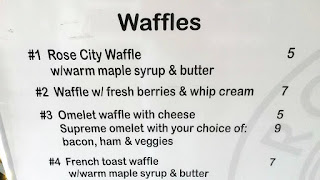 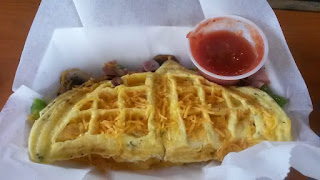 I enjoyed this mainly because it was not too heavy of a breakfast or brunch. It also allowed me to get a head start on those protein gainz. Ham, peppers, onions, and mushrooms were all awesome. Some shredded cheese was sprinkled on top of the omelet itself. 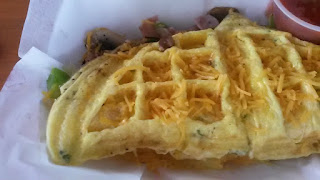 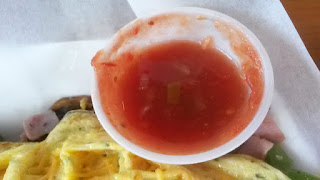 I was given a small cup of salsa with my omelet. I wish there was a much spicier option, as their salsa has zero heat (probably so anyone can eat it and not have their face set on fire). This is why pandas have to bring their own hot sauce everywhere....

Waffles to try here include the Waffle with Fresh Berries and Whipped Cream ($7) and The Big Monty ($14), a Monte Cristo made with two French Toast waffles.

Check out Rose City Waffles for a great breakfast or brunch! 8/10
Posted by Aaron at 11:00 PM