Tortoise + Hare is located at the Tidbit food pod (SE 28th and Division) in Portland, Oregon. 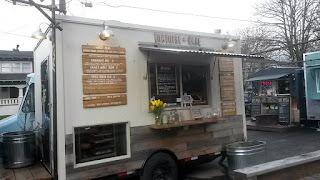 Opening in March 2016, Tortoise + Hare opened under the "slow food" movement, using local, organic foods grown under sustainable methods. The menu is seasonal and changes depending on availability of ingredients. A couple of specials may also be run in addition to the base seasonal menu. In Winter 2016-17, the base menu included Cauliflower Cake and a Farmer's Market Salad 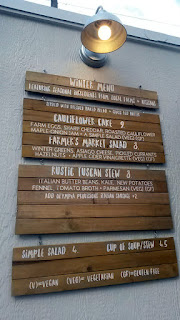 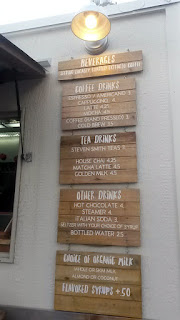 Tortoise + Hare even sells their own products (which include olive oils, sea salt, herb blends, artisan chocolate, and maple syrup) at Menagerie four days a week. Menagerie is also in the Tidbit pod, in the SE corner of the lot. 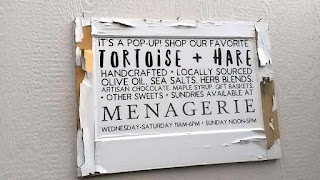 One of the specials running in mid-February was a dish that I couldn't pass up. Hatch Green Chile Stew. My love of New Mexico is alive and well, folks. Hatch chiles from Los Roast (another Portland company), posole, and potatoes, topped with cilantro, radishes, and avocado. It's vegan and gluten-free. 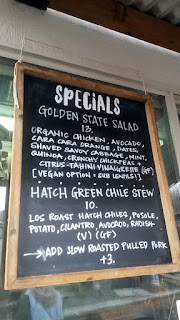 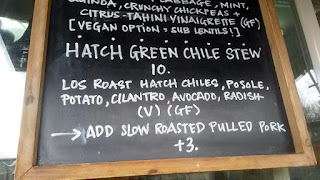 But nope, my stew didn't end up vegan. I also added their pulled pork (done carnitas-style and left to get even happier in the stew) for $3 more. Because protein gainz.

The stew is served with a house-made roll and butter. Their sea salt is on top of the butter. 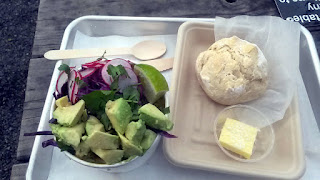 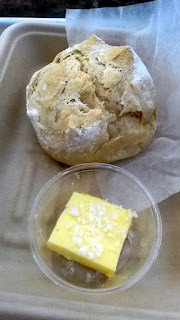 There's a bunch of toppings there, but once you get to the stew, it's glorious. Warm and hearty, as it should be. Excellent posole and pulled pork. 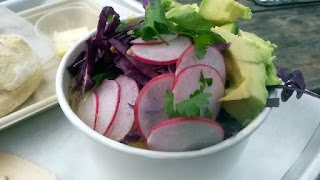 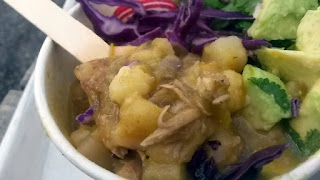 I also loved their roll, which has a chewiness and slight crunch. It is perfect for dipping in the stew, or adding a helping of the stew on top of a piece before stuffing your face silly. Great use of the sea salt on the butter.

Tortoise + Hare is a great addition to the Portland food cart scene! Congrats on one year in business! 8/10
Posted by Aaron at 11:00 PM