Burmasphere is a Burmese food cart located at the Piedmont Station food pod (NE 7th and Killingsworth) in Portland, Oregon. 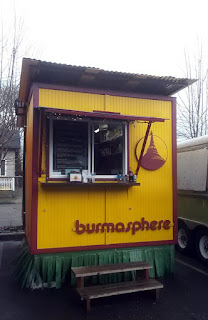 Tommy Schopp opened this cart in May 2016 after getting his first taste of Burmese food in San Francisco and loving it. After extensive research and trial and error, Burmasphere was born. 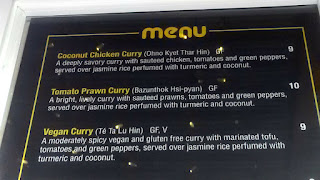 Steven Shomler mentioned a vegan ghost chile ice cream (coconut milk-based) at this cart last year, and it still exists. Tommy explained that the batch he had was a bit old, but he planned to make a fresh batch later. Apparently, fresher ghost chile ice cream will pack more kick, but I snagged a taste of the leftovers he had. The coconut and vanilla hit first, then the ghost chile nails the roof of the mouth and the throat. The ghost chiles will leave their mark in your memory. It's definitely among the spiciest ice creams I've been given so far, but granted, not many people have had this option.

As expected, the curry was hearty and delicious. Tender sliced white meat chicken. The peppers were raw, which frankly, I did not expect (thought it would at least be somewhat cooked). Toasted coconut on top was a lovely addition. 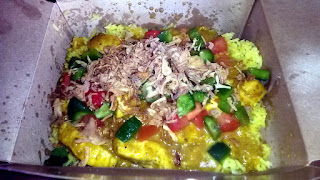 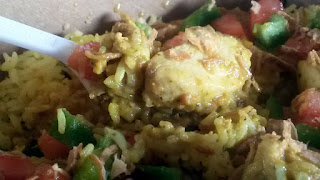 It is a very good deal at $9. The portion size should leave a good number of people satisfied. But of course, I was on lunch #2 by that point (and also previously had a beer). 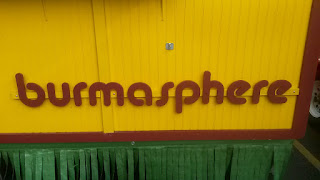 Burmese food is not commonly found in Portland, and Burmasphere is a wonderful addition to the ever-growing food scene. Check this food cart out! 8.5/10
Posted by Aaron at 11:00 PM