Last week, I headed back to Wasabi Sushi's newest spot at Tidbit (SE 28th and Division), because Alex unveiled yet another addition to the menu: the Sushi Donut. 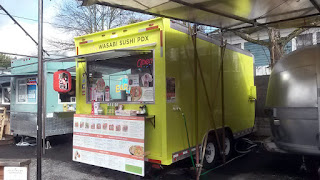 Wasabi Sushi takes over the space at Tidbit where Buki once resided.

Their menu has the usual sushi rolls and the Sushi "B-Ritto" that I've raved about in prior reviews. 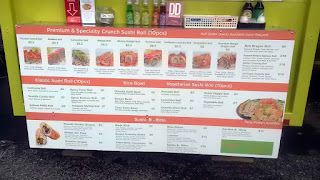 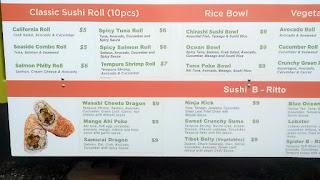 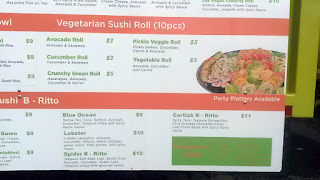 Just in the last couple years, sushi variations have taken on a life of their own. First, it was the sushi "burrito" -- a sushi roll packed with more ingredients (usually fish and vegetables). The burrito idea seemed like a natural spinoff, as I don't know of many people in that situation who would turn down more tasty fillings with their rice.

Then, it was probably late February when I first learned of the sushi "donut" -- rice formed into the shape of a doughnut, topped with ingredients like fish, sesame seeds, and avocado. I'm not sure if Alex happened to see the same articles, or if he coincidentally wanted to bring that same concept to Portland, but lo and behold, that last week of February, the Sushi Donut was launched at Wasabi Sushi.

Figuring this was at least a healthier option than heading to a Krispy Kreme, I drove down and added this into my schedule of multiple lunches.

Alex had three Sushi Donut varieties available. In addition to the attractive ingredients on top, there would be a "filling" of some type. 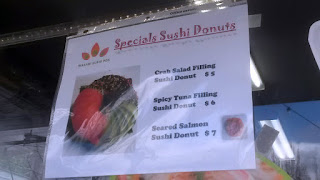 I got the Spicy Tuna Sushi Donut ($6). Rice is molded into the shape of a doughnut and a spicy tuna "filling" added; slices of raw tuna, raw salmon, and avocado artfully placed; and spicy mayo-based sauce on one section. It comes with a side of pickled ginger and a dollop of wasabi.

It's probably a regular-sized "donut" (maybe 2.5" in diameter). Excellent rice as always. Fresh ingredients on top and for the spicy tuna filling. Unique for sure.

Again, kudos to Wasabi Sushi for pushing the envelope on sushi in Portland. I honestly don't know of other places that do this here (at least yet). 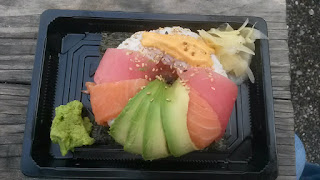 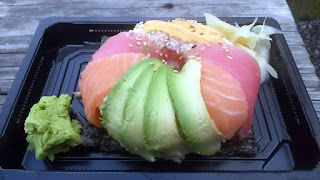 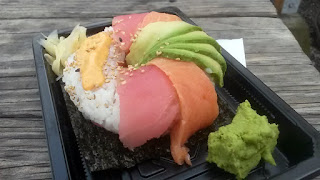 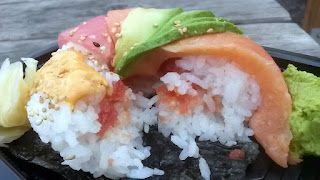 They do get backed up with orders during the lunch hour, and as a result I probably waited about 15 minutes for this. I'd probably have gotten 1-2 more items and a beer if this was to be my only food stop of the day.

Very soon, I learned that Wasabi Sushi will be opening a brick-and-mortar spot, so expect even more possible innovations and variations with the increased space.

I've seen several sushi places and sushi food carts in Portland over the years, but none like Wasabi Sushi. They stick to sushi and its variations, and their plating is some of the best in the business. 9.25/10
Posted by Aaron at 12:00 AM