Rail Side Brewing is located on NE 76th Street in Vancouver, Washington. 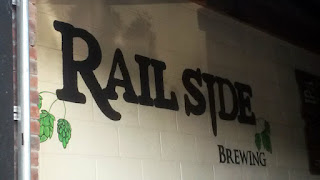 Although Clark County has a few breweries, the Hazel Dell and Felida areas didn't get too much into the game until the past year or so. To the west of Hwy 99, Mount Tabor opened up a spot several months ago, and there's Rail Side.

There's usually about 10 taps on the list here. Most of them are their mainstay beers, with a couple of true rotating options. I got a pint of their Hopper Car IPA. It didn't stand out as an epic beer to me, but it is a balanced, good go-to option. I saw that Rail Side chills their beer glasses; this can mute the flavor or otherwise affect the beer drinking experience. 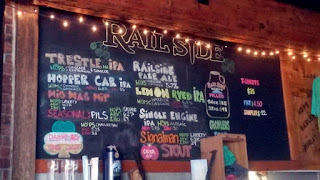 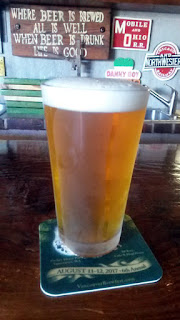 The food menu here has pizzas, sandwiches, and nachos. The nachos are indeed massive and seem to be worth the price; most people end up sharing it within the group. The pizzas, for their size, seem rather pricey.

For sandwiches, it's either the Reuben or the Cuban for $12. I personally love both sandwiches, so it was a hard decision. I went with the Cuban this time. Slow-roasted pork, ham, mustard, Swiss, and fire-roasted poblano peppers. It looked like they pressed the sandwich. The pickles were on the side here, instead of being in the sandwich. Sides also included potato salad (which may or may not have been store-bought) and a handful of potato chips. 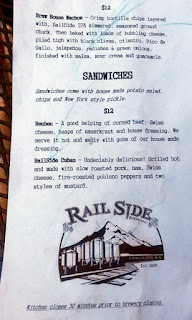 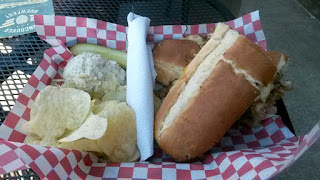 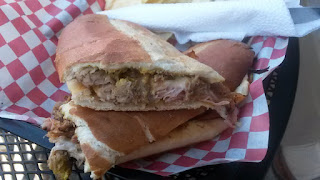 Good sandwich here. The pork was the star, as it should be. Gooey cheese and delicious mustard.

There are several parking spots in front of the brewery and to the side. It's a small space and tucked away from the main street.

It's nice to have a brewery closer to home than Portland's breweries, but Portland did spoil me. So many places there with great food and amazing beer. Still, I would head back to Rail Side every now and then for the usual beer thirty. 7/10
Posted by Aaron at 11:00 PM