Portland Burger Week 2017 was last month. While I wanted to get to several of those places for a tasty $5 burger, my schedule (and some bad timing) unfortunately only allowed me to try two burgers. 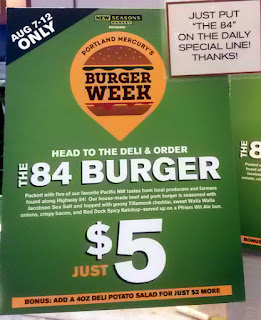 I tried getting to Fifth Quadrant and Las Primas that Tuesday. Fifth Quadrant only sold their burgers for dine-in, and I faced at least a 30-minute wait. In the five minutes I waited in Las Primas' eternal line, I barely moved 5 centimeters.

So finally, I headed down N Williams to New Seasons and managed to get their 84 Burger, using local ingredients. The burger does have bacon from Iowa, but otherwise has Walla Walla sweet onions, Tillamook cheese, Red Duck ketchup, and Jacobsen sea salt. They were out of the pFriem buns and replaced it with New Seasons buns instead. 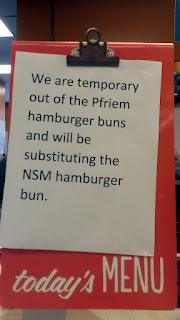 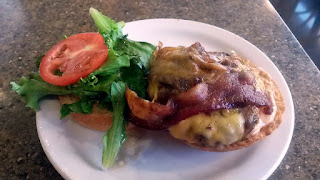 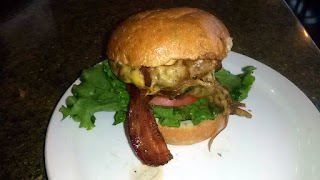 I waited probably 10-12 minutes, not bad considering the predictable burger rush. While the burger is not anything unique visually, it's very solid, juicy beef, nicely seasoned.

On Saturday, I attempted Fifth Quadrant and Las Primas again, this time during lunch. Unfortunately Fifth Quadrant wouldn't start serving burgers until 1 (I was about an hour early). Fifth Quadrant had a General Tso's "Double Stack" burger. Double beef patty with an egg foo young patty in between, and some slaw between buns. I ended up skipping Fifth Quadrant a second time; no burger for me from this spot this year.

Las Primas was open, so I did get to try theirs. A fire-grilled patty, pepperjack, Peruvian-style slaw, chili pepper mayo, and homemade pickles between a sesame seed bun. No modifications allowed. 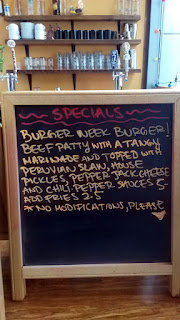 I added their excellent shoestring fries for $2.50 more, which are crunchy on the outside and soft on the inside. 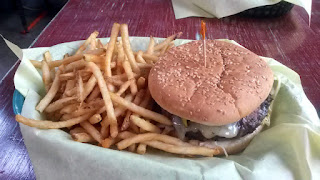 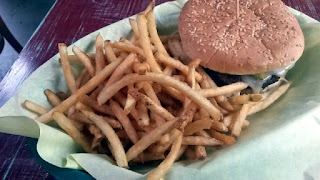 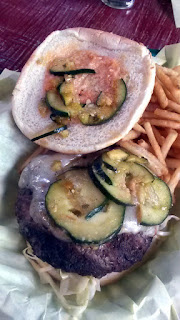 There's a reason why Las Primas has been named one of the best sandwich shops by the Oregonian. Another quality burger here, and full-sized to boot. Be sure to add one or more of Las Primas' homemade sauces. I, of course, got the habanero sauce.

Oh, and I sampled their Pisco sour while there. Not bad. 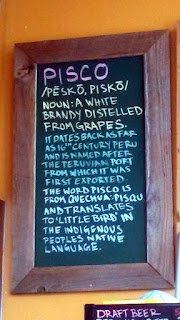 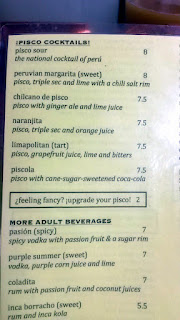 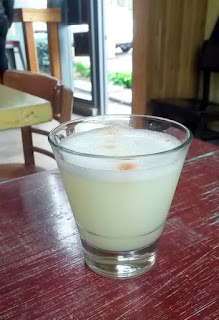 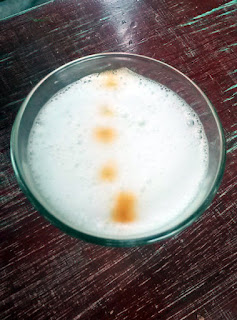 Both burgers were great. While there were a lot of others I hoped to get to, I guess there's always next year. Be sure to check out the burger list from Portland Mercury, because the participating spots also have great food options on their respective everyday menus.
Posted by Aaron at 11:00 PM