Sushi Burrito of Orem has generally located on E Univeristy Pkwy in Orem, Utah, but they also have a stand at Lavell Edwards Stadium in Provo. This blog post covers the Provo stand. 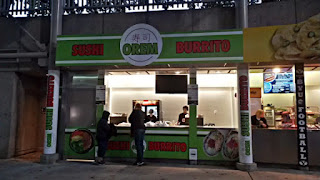 I'm seeing so many more sushi burrito spots over the past 2-3 years. It used to be an extremely original, yet genius idea, and now a ton of people have hopped on the bandwagon. Nothing wrong with that, other than the novelty of seeing it has long worn off.

If you've never had a sushi burrito, it's basically a larger sushi roll, with a bunch of fillings to make it a much heartier, more filling choice.

I have had my fair share of sushi burritos over the past 2-3 years, mainly in and around Portland. On the other hand, my mom had never tried one. So when she saw this stand at Lavell Edwards Stadium, we practically beelined for it.

There are just three sushi burrito options (all $10) on the menu here, but all of them sound great. Since my mom is trying so hard to eat healthier, we opted to go off-menu with a vegetarian option, which they happily did for us. As a compromise (since I would have otherwise devoured any of the seafood-filled sushi burritos), we threw in spicy sauce and teriyaki sauce in the veggie sushi burrito. 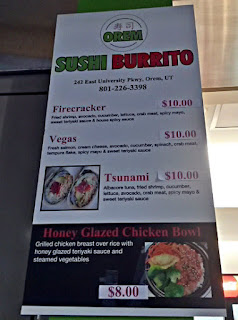 For a vegetarian option, this was excellent. Veggies like avocado, cucumber, lettuce, and spinach filled this burrito. I really enjoyed the spicy sauce and teriyaki sauce together, a lovely sweet-savory-mildly spicy dimension. 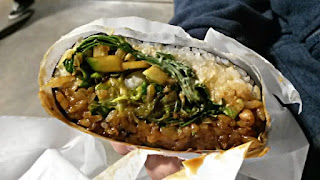 As noted above, the other sushi burritos on the menu had fish or seafood in them. The Firecracker sounded the best to me: fried shrimp, avocado, cucumber, lettuce, crab meat (likely imitation crab), spicy mayo, sweet teriyaki sauce, and house spicy sauce.

A great experience with Sushi Burrito of Orem. Check their stand out at Lavell Edwards Stadium, or head to their Orem location! 8/10
Posted by Aaron at 12:00 AM