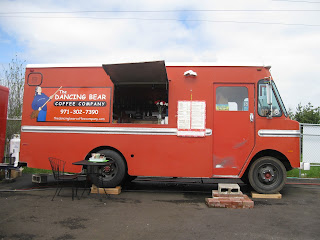 Portland needs more smoothie and juice carts. The Sip cart on NE Alberta and Moberi (currently at Rose City Food Park) have received rave reviews in the community, myself included.

Of course, Dancing Bear also serves coffee and espresso drinks, plus a limited selection of baked goods. Even on a chilly spring day last month, I wanted to try one of their smoothies.

The 12 oz. "Choco Bear" smoothie ($4.50) features almond milk, banana, peanut butter, cacao, vanilla, and agave  It's been one of their most popular smoothie selections for obvious reasons. The nuttiness of the almond milk and peanut butter comes through, while the agave and banana add some sweet thickness. I really enjoyed it. 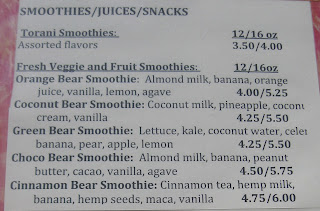 I inquired about other popular smoothies. Sue and Larry mentioned the "Orange Bear" smoothie ($4 for 12 oz.; $5.25 for 16 oz.), which has almond milk, banana, orange juice, vanilla, lemon, and agave. Initially, orange juice and almond milk together sounded pretty bizarre, but I'd still give it a try in the future.

Some places may add a bunch of ice to the smoothie, but Sue and Larry freeze certain items (i.e., bananas) at Dancing Bear to allow the natural flavors to pop more. 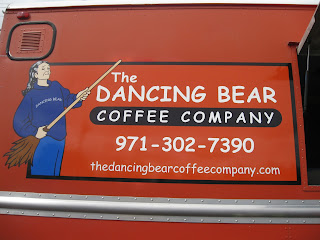 Two very friendly people here. I'd love to return and try some other smoothies, juices, and espresso drinks. 7.5/10
Posted by Aaron at 11:00 PM