OmNom was a gluten-free Belgian waffle food cart near the corner of N Killingsworth and Maryland, at North Killingsworth Station pod. This cart opened in October 2013, and I stopped by on their last day of business on December 14, 2013.

Everything was half price on the last day. After reading the menu, I wished that I had found this food cart earlier. A good selection of savory waffles and sweet waffles. 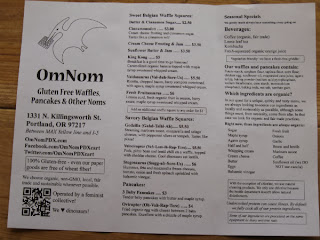 The gluten-free Belgian waffle batter was made with a combination of ingredients such as potato starch, sorghum flour, and corn flour. The owners tried to source everything locally. The cart had a dinosaur theme, right down to the waffle names.

The "Cinnamododon" ($3) is a simple sweet waffle option with cream cheese and cinnamon on top. Just as advertised, it tasted like a delicious cinnamon roll. 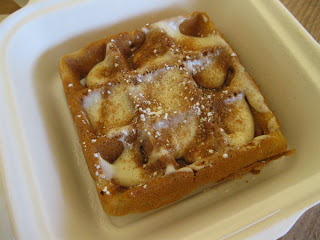 There were some sweet waffle options with fruit, such as the Fresh Fruitasaurus ($6; lemon curd, fresh in-season organic fruit, berry sauce, and maple syrup-sweetened whipped cream).

I also tried the "Godzilla" ($5), a waffle topped with marinara sauce, three cheeses (ricotta, mozzarella, and asiago), and your choice of pepperoni or tempeh. It's basically a waffle pizza. 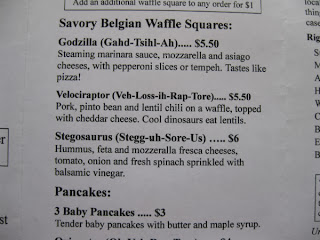 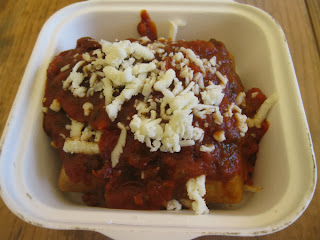 Great job on making the waffle batter. The waffles were very soft and pliable. I think if they allowed the waffle to toast 1-2 more minutes, it might have gotten harder and crunchier to stand up to the ingredients piled on top. I personally like waffles with a nice crunch to it.