There are multiple Costco locations in British Columbia, Canada. I went to the location in downtown Vancouver on Expo Blvd. 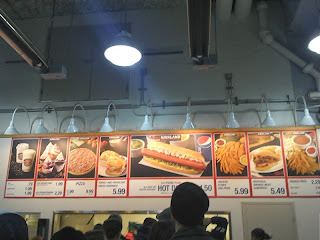 I had seen Yelp photos of the food court menu in the past and and noted a couple of different menu items offered here. Poutine was one of the obvious differences, but I also saw Chicken Strips and Fries ($5.99) and a Montreal Smoked Meat Sandwich ($5.49) offered. 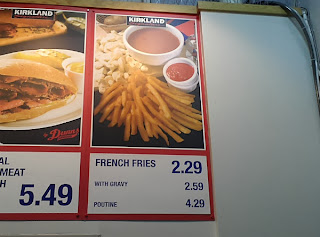 Costco's poutine ($4.29) is the usual fries, gravy, and cheese curds. You get a generous portion for the price, especially when comparing it to other places in the area. The gravy here tasted more like the brown gravy I'm used to having in the U.S. (and it probably was, for all I know). The curds didn't noticeably squeak like at the poutineries I went to. Either way, it was a tasty poutine that I would get again.

Admittedly, I didn't eat the poutine right away, and I forgot to get a picture right as I received the poutine. It was probably a good 60-90 minutes before I dug in. The gravy started gelling up on me, so it was more likely some brown gravy mix or canned gravy.

I filmed a short video of my Costco poutine experience at my friend's place. Disclaimer: The panda was not hurt during the making of this video.

I may have had better poutines in Canada, but this was still very good for the price and the flavor. 7/10
Posted by Aaron at 12:00 AM