(I'd like to wish everyone a Happy New Year! I hope 2014 is a great year for everyone!)

La Belle Patate has three locations in Canada (as of this blog post): one in Vancouver, BC; one in Victoria, BC; and a third spot in Canmore, AB. This post is for the downtown Vancouver BC spot on Davie Street. 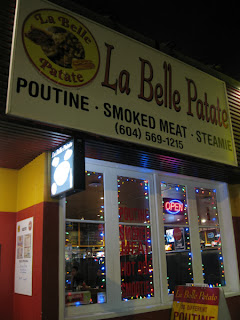 La Belle Patate touts their hand-cut double-cooked fries, fresh squeaky-cheese poutine, and Montreal smoked meat sandwiches. At the recommendation of a friend who lives in the area, I had to stop by.

The inside can seat a fair number of people. It's clear from the decor that they back the NHL's Montreal Canadiens.

Of course, I came for the poutine. There are around 30 varieties total and possibly some other limited-time specials. Choice of small, medium, or large sizes.

I got the BBQ Smoked Meat poutine ($7.50 for a small). If you want to feast away on juicy chunks of peppery smoked meat, you must get this and the smoked meat sandwich. While I initially wished I got the large poutine, I think my stomach thanked me later for holding off just a tad on the gluttony. The panda is not used to loads of yummy poutine over a multi-day span

Speaking of gluttony, there's AYCE poutine here. All you can eat. $19.50. I wanted to borrow a few stomachs and stuff my face beyond recognition.

Of all the poutines I had on my Canada trip, La Belle Patate had the squeakiest cheese curds. The fries retained a slight crispiness and the curds slightly melted while slathered in the rich, flavorful gravy. Again, I couldn't quite put my finger on the gravy's flavor profile. It's certainly not a normal brown gravy; there's seasoning in there that makes poutine gravy what it is.

Probably one of the more authentic poutines I've had. It's worth several stops if you're in Vancouver BC. 8.75/10
Posted by Aaron at 12:00 AM