(Hey everyone! I want to wish everyone a Merry Christmas!)

Yolk's Breakfast is located at the corner of Dunsmuir Street and Beatty Street in downtown Vancouver, British Columbia, Canada. 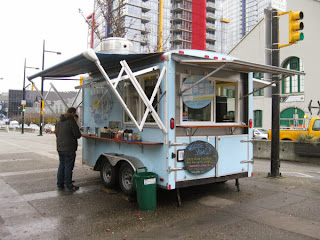 After doing a food truck search of the area and seeing the numerous favorable reviews, I immediately put it down on the list of places to try. I love poached eggs, and putting Eggs Benedict in sandwich form is pure genius. 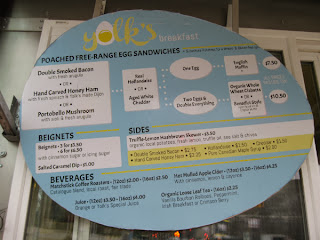 The egg sandwich option is virtually a create-your-own situation. Three choices for protein, then choice of Hollandaise or aged white cheddar. Next is the option for one or two poached eggs. One egg gets you an English muffin, while two eggs allows a ciabatta or whole wheat bun.

I went with ham and one poached egg ($7.50) so that I could also sample Yolk's cart-made Dijon mustard alongside the cart-made Hollandaise. Real ham here folks, none of the processed cold-cut stuff. I broke the perfectly poached egg and allowed the yolk to ooze all over the sandwich before diving in. 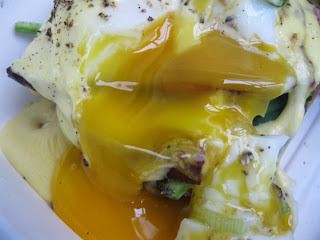 Explosive flavors, truly a memorable sandwich. The Dijon and Hollandaise work so well together.

The Truffle-Lemon Hashbrown Skewer ($3.50) brings glorious flavor on a stick. The lemon brings a refreshing dimension against the truffle oil and sea salt. It's then garnished with diced green onion. An ideal accompaniment with the poached egg sandwich.

Enjoy the egg sandwich and hashbrown skewer with some spicy ketchup! No, it's not nuclear spicy, but it has ingredients like cayenne and paprika in it. I wonder if they will let me drink a whole bottle of it....

On a chilly day, the Hot Spiced Apple Cider ($3.50 for 12 oz.) truly hit the spot. Intense apple flavor. Cinnamon is the logical spice to go with this drink. Cayenne pepper brings a tickling throat jab. Hell yes. Sweet and addicting. Keep stirring the drink for best results; the spices will keep sinking to the bottom. 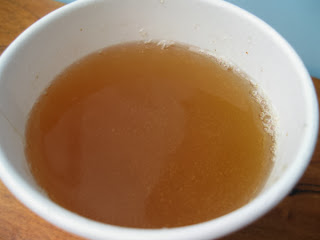 On Fridays (and I believe also on the weekends), there's a Chicken and Waffles option. Yes, they have real Canadian maple syrup. Maybe next time.

I can see why the accolades have constantly poured in for Yolk's Breakfast. It's an awesome place to get your breakfast fix. Bravo. 9/10
Posted by Aaron at 12:00 AM