The past few weeks have been fairly normal -- for people who like to hurt themselves with sugar and spice. Nothing like 4-pound cupcakes and a Reese's video response to a huge YouTube star. 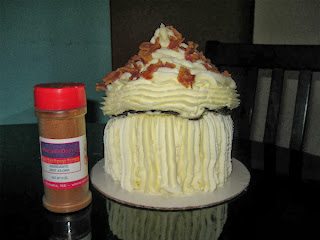 Several people have asked me to review their products, and I've tried to honor the requests in a somewhat timely fashion. The numerous Sweet Sunshine sauce reviews will continue to be spaced out into the year 2014. For the second of six reviews, I reviewed their "Warm" sauce a couple weeks back.


Roland from In the Hot Seat sent a bottle of his homemade "Hawaiian Amazon" hot sauce. Trust me, I'm making this one last -- which isn't too hard only because I have a gazillion other sauces already in the rotation. The "Hawaiian Amazon" is a very solid sauce. Well done, sir!


Rocky, a fellow YouTuber, also sent me a package of spicy chocolates. These were clearly made for chileheads and would probably send the others racing for the ice cream. I would totally be interested in eating more of these!


More sweet-spicy combos! Legendary Doughnuts does a version of the cronut, dubbed the "doughsant." I added Adoboloco's pineapple-habanero hot sauce. What would I think about that combination?

So finally, we get to the common question of "How stupid can the spicochist be?"

I talked with the owners of Twinsies Coffee and Cupcakes, and they thought it would be awesome to have me eat a 4-pound cupcake that could feed 12-14 people. How far would I get on this? Click the video to find out!


I love Reese's Peanut Butter Cups, enough for me to subject myself to another L.A. Beast video response. L.A. Beast powered through 60 in his video. I set the goal at 75, or about 2.5 pounds of lovely sugar. How many would I eat?


More idiotic stunts and spicy reviews to come in future blog posts! Stay tuned.
Posted by Aaron at 12:00 AM