Smoke's Poutinerie has multiple locations across Canada. This review is for their poutinerie in downtown Vancouver, British Columbia, Canada. 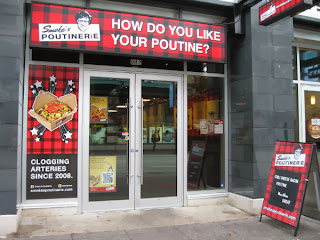 You can "DELUXE-IT" for a few extra dollars, or "WOW-SIZE" any poutine and get that much closer to yummy gluttony. 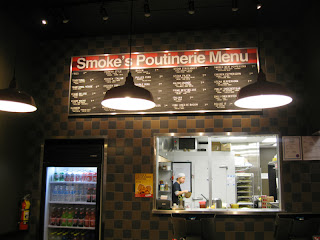 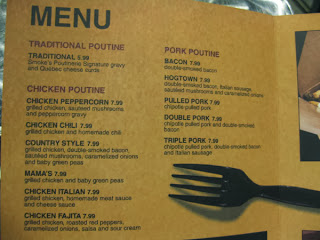 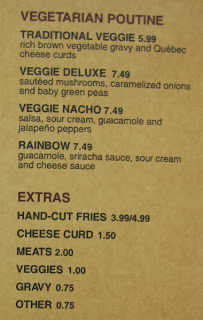 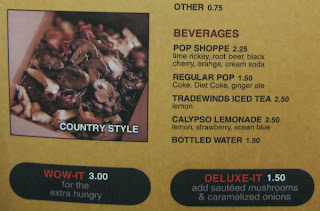 I barely had time to squeeze in a regular Traditional poutine here ($5.99). The fries had a slight crispness, thicker than the usual French fries I had growing up. The gravy had a unique flavor, perhaps a bit of herbs and vinegar incorporated.

The cheese curds squeaked as I chewed and savored. The curds slowly melted after the hot gravy was poured. Lots of curds, too. Frankly, it's the most traditional poutine I've had to date.

You can get a brown veggie gravy for the traditional poutine, so I assume that the signature gravy is meat-based in some way.

Meat lovers should try any poutine topped with shaved Montreal smoked meat. And bacon. Heck, add all the meats and it'll probably be called epic.

While most of the menu is for the carnivore, a few veggie options are available. The Rainbow Poutine ($7.49 regular) is topped with guacamole, sriracha, sour cream, and cheese sauce. Probably one of the more colorful options out there.

Smoke's Poutinerie sponsors a poutine-eating contest for Major League Eating. Unfortunately, I cannot eat 24 pounds of poutine in one sitting, like Joey Chestnut.

Smoke's has locations all across Canada. If you're near one of those locations, check them out. I'm already planning to return next time I'm in BC. 8.75/10
Posted by Aaron at 12:00 AM