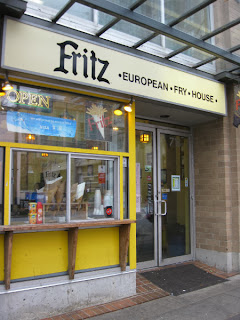 As the name of the place shows, this is a place for fries and several dipping sauces. Hot dogs and veggie dogs are also available. If you're getting poutine, add a few bucks for toppings like bacon, Montreal smoked meat, or extra curds.

The inside has limited space. There are benches along the wall (with mini tables) to sit at and enjoy your meal (or snack in my case).

There are four or five sizes to choose from. Poutine ranges from small ($5) to bucket size ($11). Yup, I've never heard of a bucket of poutine before. Even so, it's not like you'll be getting a huge KFC-sized bucket of poutine (i.e. no bucket that probably holds 20 pieces of chicken). In fact, the bucket size isn't much larger than the jumbo. 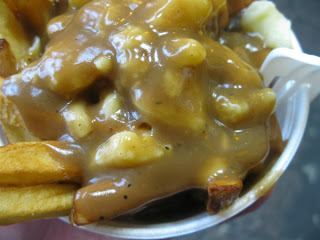 Arguably, the gravy really makes the poutine because it brings the fries and cheese curds together. The gravy is light brown in color. Some may think it's salty; I just say it brings flavor to the party. Fritz shows its expertise on fry making, and the curds melt into a nice stringy mess after a dose of gravy is piled on top.

Initially, five bucks for a small poutine here seemed a bit steep. I was probably done in about five panda-sized bites. Still, the prices for a large or jumbo poutine may be comparable to similar serving sizes at other poutineries in town. 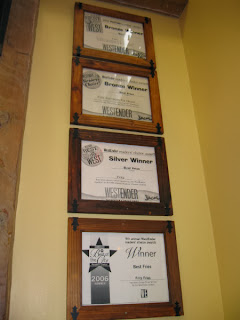