Fry Guy is located near SE 13th and Lexington (Sellwood) in Portland, Oregon. I stopped by on their first day of business: November 8, 2014. 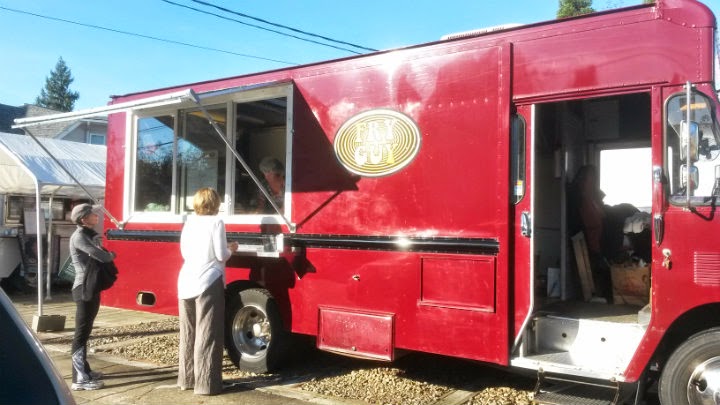 Having been to hundreds of food carts and food trucks in multiple states, I immediately saw the first-day jitters. They were prepping, trying to figure out the system, likely hoping things would go as smoothly as can be. It generally doesn't go as seamless as one might hope.

On the first day, the card machine was not set up. Cash only for at least the first few hours. I hope they got that taken care of. I felt bad when other people went up to the window to order, then realized they couldn't pay because they only had a card. It's amazing to me how so many people these days pay for just about everything with a card. Convenience is likely a big factor. 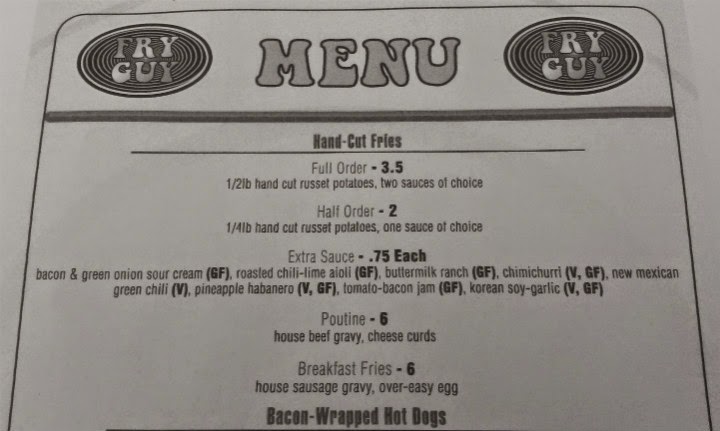 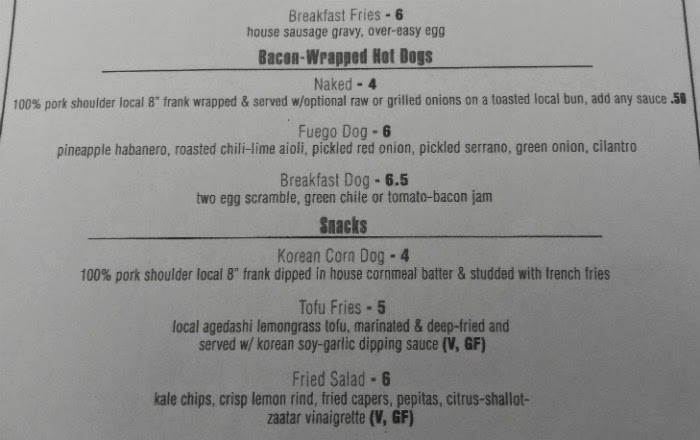 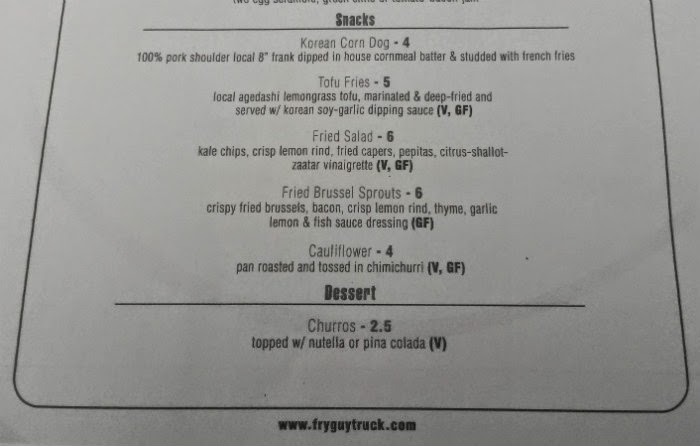 Because Fry Guy is a food cart serving fries, homemade sauces, and poutine in Portland, people will compare them to Potato Champion, a food cart already with a huge following.

As noted before, poutine on the menu. Fries, house-made gravy, and cheese curds. 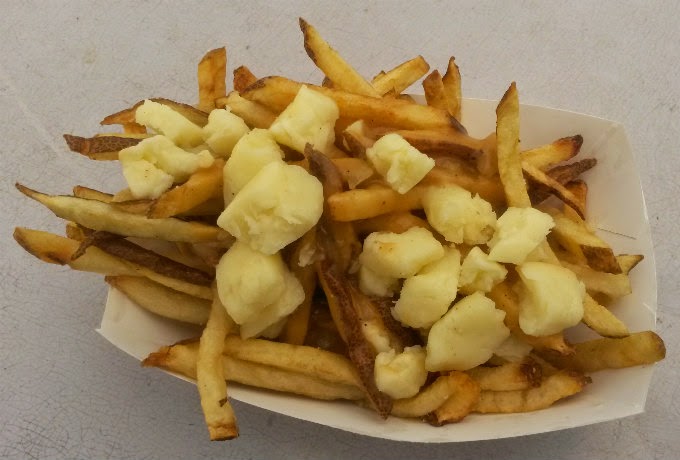 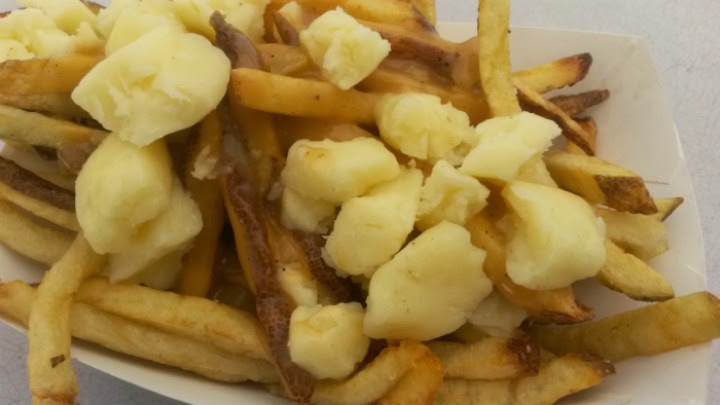 It's a decent portion for $6. Good amount of cheese curds, but I've yet to find a place in the United States that delivers squeaky curds. Canada has royally spoiled me.

I'd recommend more gravy on the poutine. People that saw my photo on Instagram asked where the gravy was. It's there and has a nice flavor, just gotta be a bit more generous.

The fries are just OK at this point. Slight crunch. I prefer my fries a bit more well done.

If you want to start a food cart in Portland, come out firing on all cylinders and delivering top-notch food. It's an extremely competitive market. 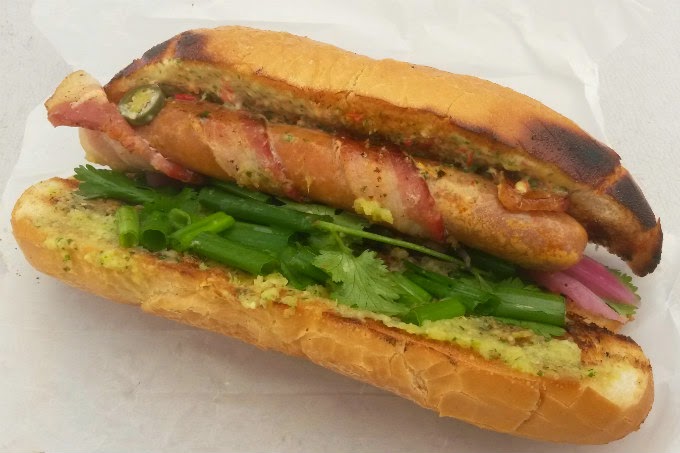 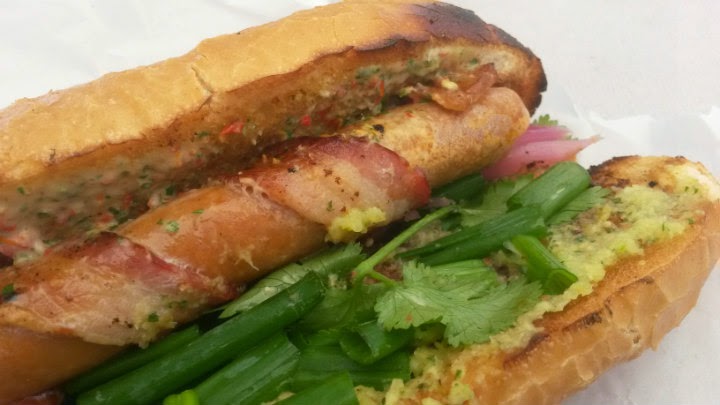 There's a ton going on in this bacon-wrapped dog. Lovely, colorful presentation. The flavors are great, and I especially like the pineapple-habanero sauce and pickled red onions here. I'm a huge fan of toasted buns.

However, I think having a ton going on here can be viewed as a negative. It's a large bun with a long, narrow dog. Call me a traditionalist, but I want a more fitting meat-to-bun ratio. Put the rest of the toppings on top. Perhaps the huge bun will make it seem more worth it in price, but exceptional flavors would also persuade me to get this item again.

There are breakfast-inspired options here as well, including Breakfast Fries ($6; include house sausage gravy and an overeasy egg) and a Breakfast Dog ($6.50; two scrambled eggs and green chile).

This food cart might benefit if it stays open at nights/late nights and is next to a place with beer. The items here sound like excellent hangover food. 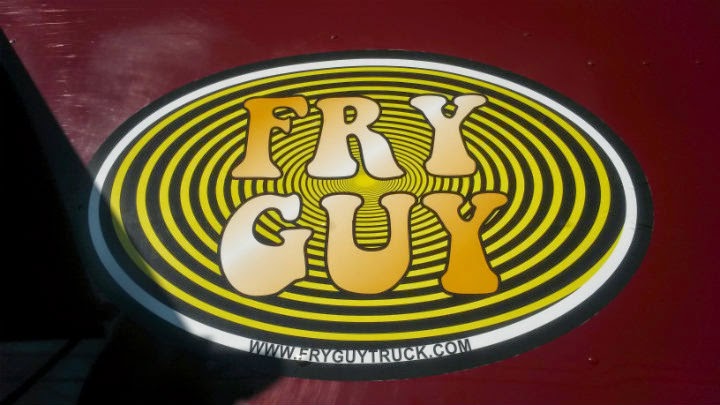 Obviously, the people at Fry Guy don't have to take my suggestions. It's one dude's opinion, after all. But I hope they do make it in Portland. 6/10
Posted by Aaron at 12:00 AM