Kingsland Kitchen is located on SW 5th and Oak in downtown Portland, Oregon. 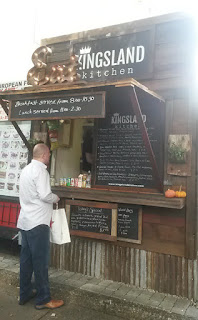 Finally, after several months of knowing about this cart and not being able to make it down, I had my shot in late October. I heard about Chris and Holli's cart through Steven Shomler, and basically remember that I wanted to try this place for their Full English Breakfast.

Chris and Holli bring some British cuisine to Portland. From what I know, we do not have many places serving British or UK food. 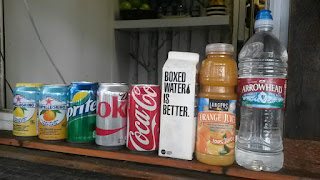 There's a breakfast menu that runs until about 10:30, then the lunch menu runs until they close at 3 PM. The breakfast menu mainly has an array of English Muffin Sandwiches. Lunch brings dishes with British and Indian influences. 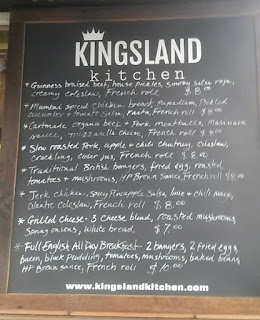 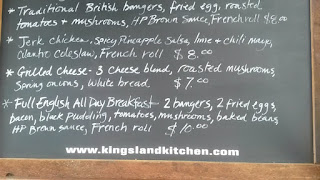 The Full English All Day Breakfast ($10) is what I was after. Two bangers (sausages), two fried eggs, bacon, black pudding, tomatoes, mushrooms, baked beans, HP brown sauce, and a French roll (instead of white bread). The roll was on the bottom, so it felt more like a ginormous open-faced English Breakfast sandwich in theory. 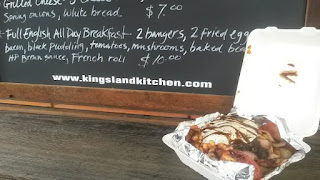 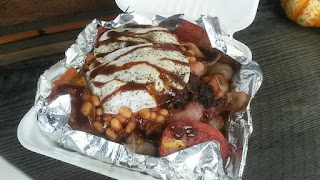 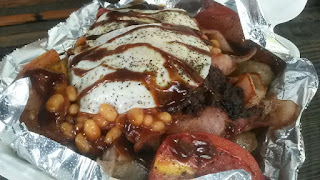 My first English breakfast was an excellent one. It seemed like the right ratio of ingredients -- and an abundance of them. Perfect fried eggs in which I could still break the yolk over everything. The tangy brown sauce really works with this, and the tomatoes provide the acidity to cut through all the heavier bangers, bacon, and beans. 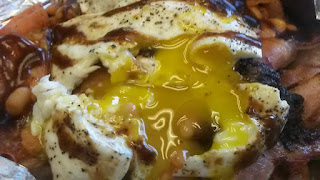 My competitive eating friend, Randy Santel, has made a couple trips to the UK and Ireland, and I've seen him take down some massive English breakfast challenges overseas (you can search his YouTube channel for those videos). It's probably from those adventures he posted that made me really want to try an English breakfast. I'm glad there is now such an option in Portland.

At $10, this is simply an awesome deal. It's enough food for two people to share as a meal, or for one hungry panda to devour.

Although Kingsland Kitchen is only open on weekdays for now, I may have to make trips down to Portland to get more of this. Chris told me that he is currently attempting to get a mobile truck so that they can do events. Totally looking forward to that! 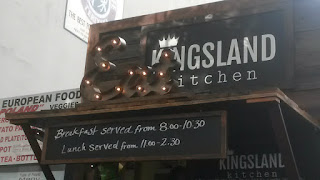 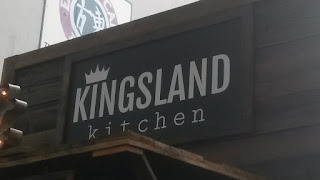 These two are some of the nicest cart owners around. Hit up Kingsland Kitchen and get some of this food! 9/10
Posted by Aaron at 12:00 AM