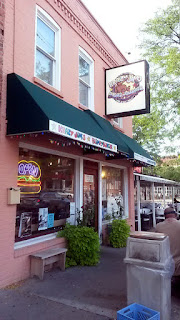 Yet another spot which was featured on the Ann Arbor episode of Man v. Food. At the time of that filming, Blimpy Burger was at its original Division Street location, in a spot they had rented for many years. In 2013, Blimpy Burger was forced to move, and their last service there was in August of that year.

Blimpy Burger remained closed for several months as the business owners sought to find another space in Ann Arbor. When they did (on S Ashley), they made sure that the kitchen equipment, tables, and chairs made the trek over as well. In fact, my friend and I sat at one of the tables (and chairs) that came from the Division location.

It's true, you can get over 2 billion combinations of burgers at Krazy Jim's. Be warned, there is a system on how to order. First is the fried items, such as fries and onion rings. Next is how many patties (per burger) you desire, and the type of bun you would like. After that, they'll ask what grilled items (i.e. mushrooms, onions, egg) you want. Fourth, you'll be asked for the type of cheese (if any) for your burgers. Finally will be any "wet" condiments (i.e. ketchup, mustard) and toppings (i.e. lettuce, tomato). 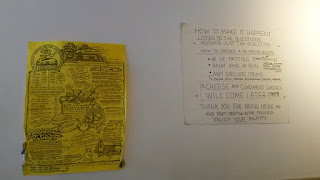 I got some onion rings to start. Not a lot of batter on these, and be ready for lots of grease. At least you'll taste sweet onion and not need to bite through a thick layer of fried batter. They go well with BBQ sauce. As this was my dinner, though, I was regretting the greasy onion "medicine ball" that was forming in my stomach. 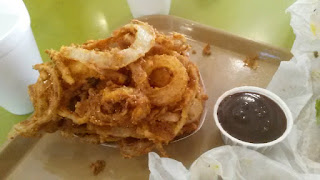 I ordered two "double" burgers (two patties each) on an onion roll, with grilled onions, mushrooms, and an egg on both. American cheese this time. Cold toppings included lettuce, tomato, and mustard.

If you get an egg here, it will be scrambled by default. If you want it runny (whether over easy or sunny side up), you will have to request that. If you get grilled onions, Worcestershire gets squirted on them. 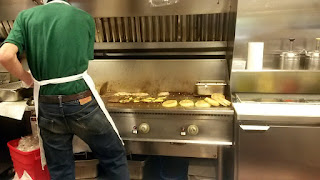 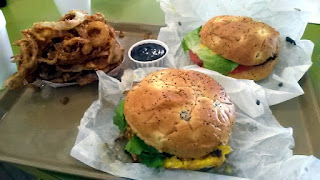 The burgers themselves were very good. The patties are only about 1.5 oz so a quad or a quint will still be less than a half-pound burger behemoth. If you're in the mood for more meat and less bun, stack one burger with more patties.

Apparently, there is a woman who works at Krazy Jim's that is notorious for making people re-order their food until they get it right. It seems more along the lines of "being paid to be brash" with the patrons. Easily offended people (or those who simply don't know) might take it the wrong way. I wouldn't be surprised if that has led to any negative online reviews of the place.

My friend and I were very lucky to be greeted with virtually zero wait. The line goes out the door when there is a sports home game (especially football, but also for basketball and hockey) and during peak feeding times during the school semester.