Slow's Bar-B-Q is located on Michigan Street in Detroit, Michigan. 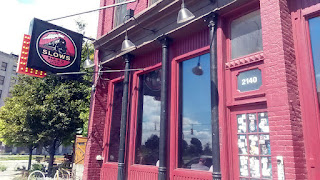 Another blog post, another spot as seen on Man v. Food. Adam Richman went here on the Detroit episode.

Slow's has been a popular spot in the Corktown neighborhood for many years, even back to when the Detroit Tigers played at Tiger Stadium just a few blocks away. Even before their MvF appearance, Slow's was immensely popular with locals and tourists, at times leading to 2.5 hour waits for food and/or seating.

Over the last few years, more food and alcohol options have surfaced in the area, lessening the chaos at Slow's. In fact, when I entered Slow's after 1 PM on a Sunday, Joe, who was one of the bartenders (and my server) said that I was his first customer of the day (they open at 11 AM).

There's a number of draft beers on tap, plus a full bar. I asked for any local (Michigan) IPAs and Double IPAs available on tap. Ultimately, I got Right Brain Brewery's "The Second Coming" Double IPA, a seasonal beer which is usually available in December. It was still on tap in September, so Slow's likely has a huge number of kegs to choose from. At 8.3%, the Second Coming drinks very easily (malty but not overly so), some floral, but also not too bitter. It's balanced, with flavors typical of Midwest IPAs that I've had. 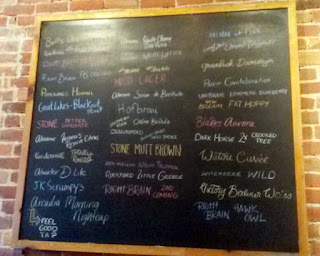 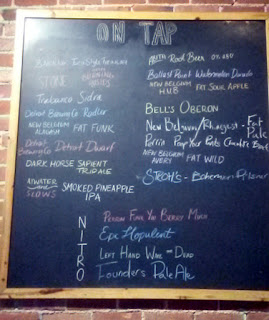 For food, I got "The Reason" ($9): Slow's pulled pork topped with cole slaw and dill pickle slices. You can get it on bread or a Kaiser poppyseed roll; I got the roll. 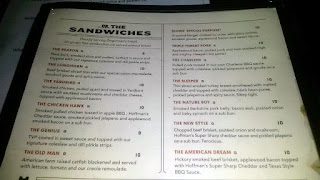 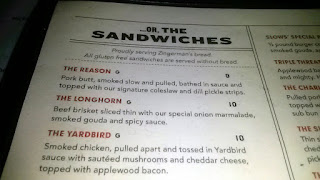 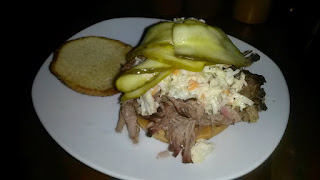 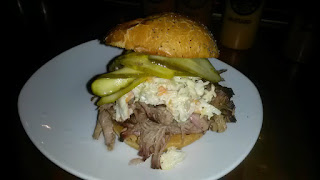 I kid you not, right after ordering, I turned around to take a picture of the taplist. I turned back around and my food was waiting for me. I would like to assume wearing my food adventures T-shirt had something to do with it, but whatever the case may be, I was quite happy.

Incredible pulled pork. Juicy, tender, smoky, seasoned well. Crunchy cole slaw with a bit of tang and not drowned in any mayo-based liquid. Loved the pickles on the sandwich. The roll was very lightly toasted, and even that goes a long way.

Seriously, get the roll. It will likely make for a more imposing, towering sandwich that looks that much more appealing.

Slow's has five different BBQ sauces to choose from: 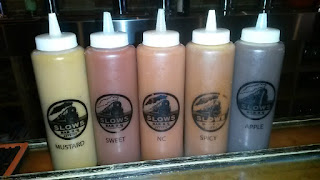 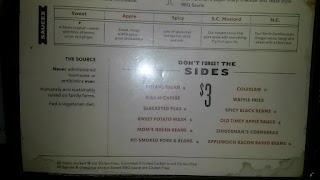 I, obviously in the interest of science, also combined all five sauces. It ended up becoming an apple vinegar spicy BBQ sauce. And it still worked. On the day I went, I was more a fan of the Apple and Mustard sauces. If I had to pick one sauce, I'll take the Mustard.

Slow's will be (or has already started) selling their sauces at the restaurant. As of yet, no online store to have them shipped to other states. But who knows, it may likely happen.

Joe (my server) was a cool dude. We talked for a bit about the area. He mentioned that Slow's was probably in that "cycle" of business right now where business was not as booming due to other businesses popping up. Still I could tell he wasn't worried at all because Slow's has been around for so long. The loyal following and increasing word of mouth should keep them going.

Adam Richman gave his seal of approval on Slow's several years ago. Other people agreed and said I should go here. Now I give my own seal of approval. 9.25/10
Posted by Aaron at 11:00 PM

Email ThisBlogThis!Share to TwitterShare to FacebookShare to Pinterest
Labels: Michigan, The Elite (9+ Rating)