Last Thursday, on November 3, 2016, I joined other food/beer enthusiasts for a special dinner at Culmination Brewing to formally introduce the new executive chef, C.J. Mueller.


After the brewery's previous head chef, Carter, amicably parted ways with the company, the search was on to find a replacement who could continue the vision of pushing the envelope of food pairings and creativity. Enter C.J., a professionally trained chef who also homebrews in his spare time. 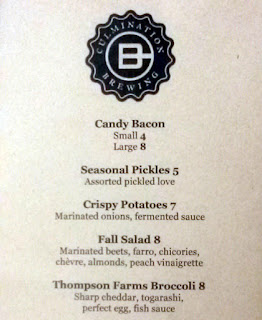 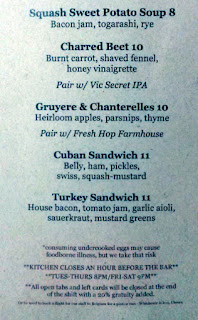 I got there early and had Culmination's Elation Double IPA (shown above) before the dinner began. We were then taken to the back of the brewery for the event. It was a multi-course offering, with beer pairings for each.

Bread with liver mousse waited for us at our tables. I'm not used to having liver mousse with any portion of my meal, but I thought it was pretty good. 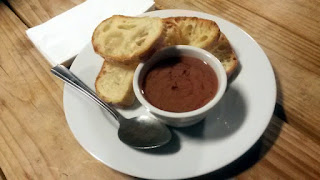 Culmination's 2015 Kriek was a pleasing tart experience, somewhat refreshing to me and not overwhelming on the sour notes.


Culmination's Fresh Hop Farmhouse Ale was the third beer of the night (second with the dinner courses). Confirmed that pretty quickly with immediate qualities of a Saison. Refreshing again, light, with spice and hay notes.

First course was broccoli with togarashi, cheddar, fish sauce, and a soft egg. The intense Asian flavors worked with the light Farmhouse Ale. 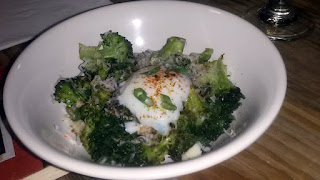 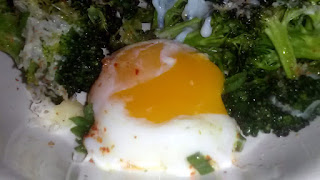 C.J.'s next course was a dish of Gruyere, chanterelle mushrooms, baked apples, crunchy onions, and parsnip foam. This dish was a clear example of his professional training. A myriad of textures (creamy, crunchy, velvety, etc.) and flavors (sweet, tangy, acidic, umami, etc.) that all balanced. Once again, the Farmhouse Ale paired nicely. 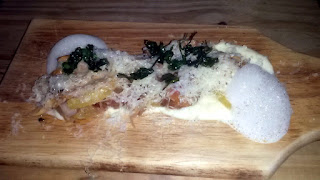 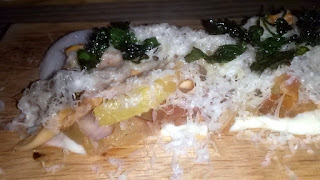 Tomas and April served Vic's Secret IPA for the next course. This beer, named after the hops used, has grapeseed, sweet, slight tropical, and some dank qualities.

Course #3 was charred beets with Gruyere, local arugula, toasted almonds, and honey vinaigrette. If you're a beet lover, this one is up your alley. Properly cooked, to the point where it still retained its body and shape, a bit of resistance. I love IPAs in general, so I'd probably have paired Vic's Secret IPA with just about anything. 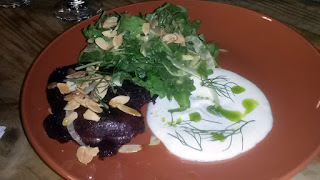 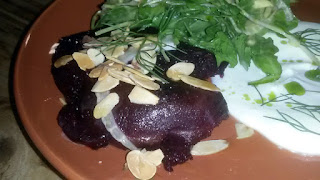 Culmination's Burton Ale was the next beer. Some yeast, cherry tart on smell, and tasty. It is bourbon-barreled cherry on flavor, brown in color. It stays true to an English ale and has some hop bitterness. It is best when not very cold, in order to open up the aromas and flavors.


The first main course was a version of colcannon (think potato cake in appearance here), with miso gravy and chanterelles. Brussels sprouts on the colcannon. The best part was the gravy and mushrooms; the heartiness of that was perfect for a cool fall day. The colcannon was delicious and reminded me of an earthy corned beef hash. A great pairing with the cherry and tartness of the Burton ale. A more upscale rustic feel on this course. 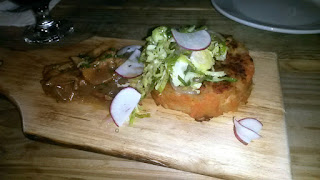 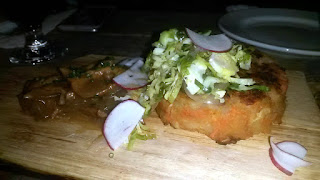 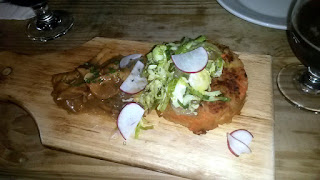 Culmination's flagship Phaedrus IPA was served with the final dish. Rare steak, cooked sous-vide, with charred chickory and a soy-butter emulsion. The meat is sealed in an airtight plastic bag, then steamed or placed in a water bath to retain moisture. The soy-butter emulsion elevated that meat to big-time gourmet levels. Again, I'd drink an IPA with virtually any meal, and Phaedrus, with its tropical experience, was a delightful pairing. 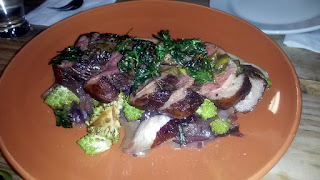 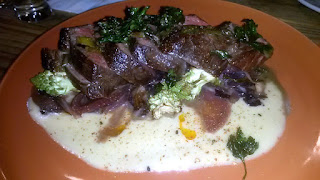 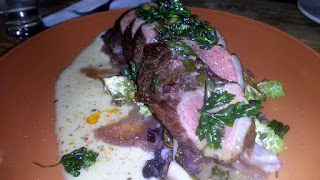 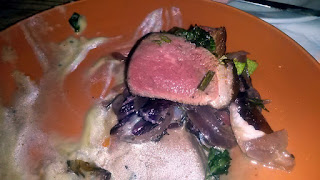 Tomas was happy to have C.J. aboard. It would be a New American tapas-style menu with intent to pair food and beer together. Tomas reiterated that Culmination would never just be a place for beer; he wants to give people a chance to play.

The stout paired with the dessert for the evening, homemade pumpkin pie. The whip cream used their 4 and 20 Imperial Black IPA, and had a couple drops of concentrated pumpkin seed oil. Genius move with the oil for additional nuttiness. 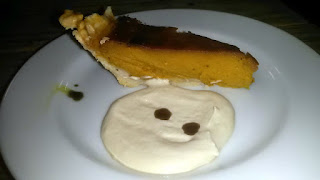 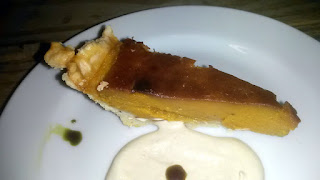 As far as the menu I received for the dinner, it would be an ambitious menu if going with it on an everyday basis. A side of me simply prefers getting tacos, nachos, or other "bar food" with my beer. Apparently those days may be gone for now.

Huge thank you again to everyone at Culmination for inviting me. I look forward to more delicious eats from them down the way!
Posted by Aaron at 12:00 AM