Tat's Delicatessen is located on Yesler Way in Seattle, Washington. 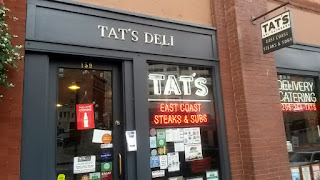 The panda wanted to treat himself to his first Seattle Seahawks game back in late September. While Tat's is generally closed on Sundays, they will open on Sundays for any Seahawks home games three hours before game time. The game was at 1 PM, so they opened at 10 AM this time.

Being one of the first inside has its advantages. This place will get slammed at peak times.

Tat's is an East Coast deli, serving up all types of sandwiches. They got hoagies, cheesesteaks, and everything else you can think of. Sandwiches generally come in 8" or 12" form. Not too surprisingly, they appear to be fans of Pat's, King of Steaks in Philadelphia. 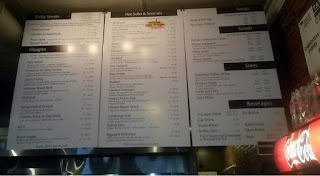 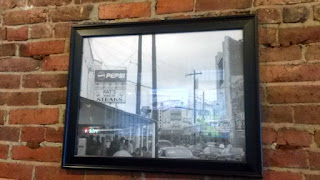 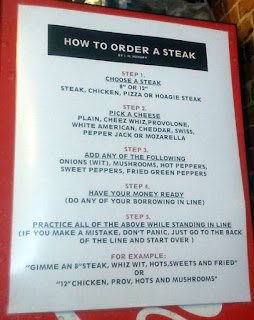 I had to get the Tat'strami, one of the signature sandwiches here. Pastrami made in house, cole slaw, melted Swiss, and Russian dressing on an Italian roll.Think pastrami cheesesteak with slaw here.

Tat's has tons of rave reviews, and add me to that list. Outstanding pastrami, crunchy slaw, stringy melted Swiss, and the right amount of Russian dressing. While I could have devoured a 12" ($13.50) rather easily, I opted for the 8" ($9.75) this time to save a bit more room for beer at the game later. 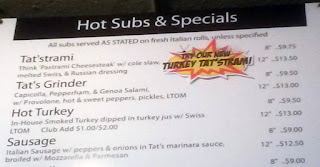 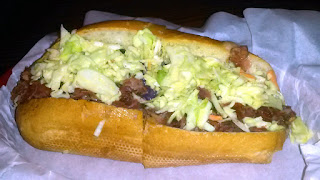 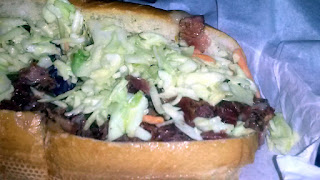 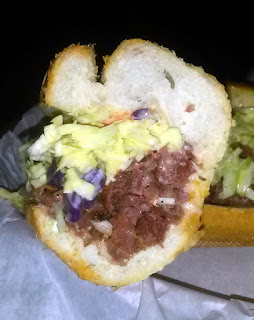 There's also a Turkey Tat'strami option if you're interested.

If you get to Tat's for breakfast, they have a small breakfast menu that is also a hit with the locals. They are open at 8 AM on weekdays. 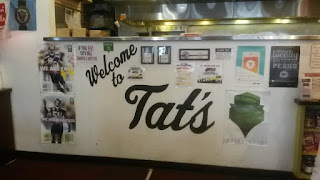 Tat's is an outstanding spot for sandwiches in Seattle! 9/10
Posted by Aaron at 11:00 PM