Gila River Arena is located on W Maryland Avenue in Glendale, Arizona. It is home to the NHL's Arizona Coyotes and houses various other events. 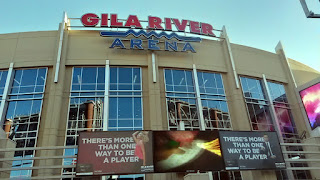 It took a couple years, but I finally made it to my first NHL game. I've been a hockey fan for years. The fighting suckered me in, and the fast, physical nature of the game kept me hooked. I have no one team allegiance, simply a fan of the sport. I had taken trips to Vancouver BC in the past during hockey season, but the Canucks always had a road game.

There are lots of free parking within walking distance of the arena. I parked at the Tanger Outlet mall about a couple blocks away.

I went to the Coyotes' first home game of the season, where they faced the newest expansion team, the Vegas Golden Knights. The close proximity between clubs and the surrounding desert create automatic rivalry potential. 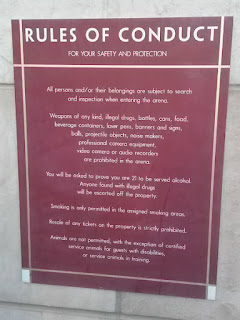 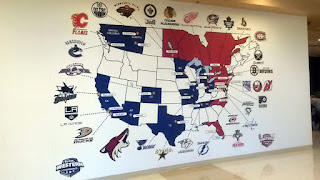 I was in the upper bowl, which did seem a bit far from the action, but I did like being able to see everything. Sitting around center ice (as opposed to one of the ends) is ideal. 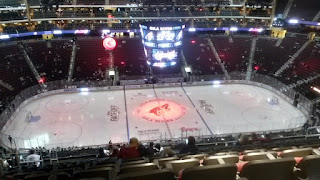 There is one Pacific Division championship banner in the rafters, and seven honored numbers on the facade of the upper bowl. Of the seven numbers, only three (Keith Tkachuk, Teppo Numminen, and Jeremy Roenick) played for the Coyotes. Three (Bobby Hull, Dale Hawerchuk, and Thomas Steen) played for the original Winnipeg Jets. Wayne Gretzky's #99 is retired league-wide, but he was also part-owner (2000-09) and coach (2004-09) for the Coyotes. 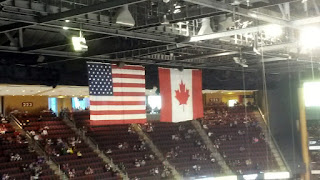 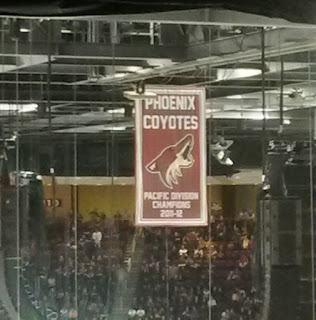 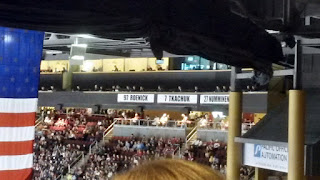 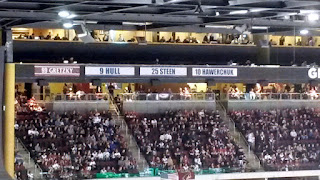 The panda was not thrilled with the arena's beer selection. It was very limited, and virtually none appealed to me. There may have been a Lagunitas IPA on the second floor, but that was it.

The food selection is also fairly standard. I went to the Power Play Poutinerie booth for their Green Chili Pork Poutine. The pork was good, but the fries were pedestrian. A small portion for $12.50. 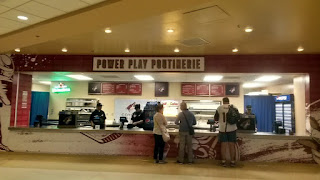 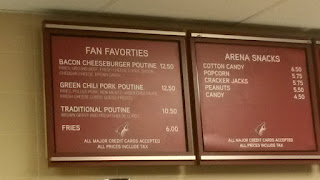 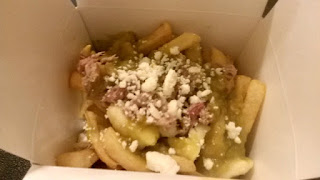 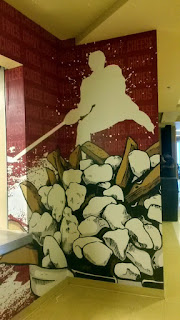 I'd definitely recommend getting food and beverages at one of the surrounding restaurants or brewpubs instead. Perhaps the nachos would be one of the better food items to get at the arena.

The PA announcer said the game was a sellout of 17,125. I call BS on that; there were a bunch of empty seats just in my section and a lot more throughout the rest of the arena. The announced number was probably the number of tickets sold. Places generally use the "tickets sold" number instead of turnstile count to make the numbers look better. With electronic gadgets in arenas these days, it should be easy to get a turnstile count by the end of the game.

The sucky part, of course, is leaving when everyone else does. You'd be waiting a while just to get out of the area. Lanes and streets are coned off, so just follow the herd.

As for the game, the Coyotes had a 1-0 lead, but Vegas tied it late in the third period and won in overtime. 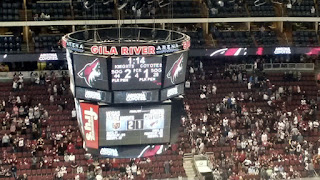 Overall, Gila River Arena was a good experience, and I got treated to a close hockey game. However, the food and beer selections can improve. 6.5/10
Posted by Aaron at 12:00 AM