Leikam Brewing is located on E Burnside in Portland, Oregon. 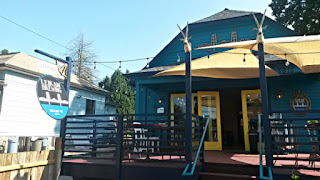 This is a kosher brewery in Portland. Unless the website said so, or unless the founders said so, I otherwise wouldn't have noticed. It basically started as a hobby for the owners, being homebrewers, and they turned it into a full-on business circa 2014.

It's a homey spot. Maybe five seats at the bar counter and another five tables inside. Front patio has 4-5 more tables.

Two food carts outside. As of early August, there was a poutine cart and a Jamaican cart present.

There's six rotating taps of beer here, all Leikam's brews. To maximize the experience, I got a flight of four 4 oz pours ($7). 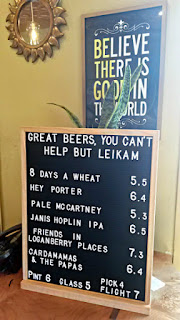 All the beers I tried were delicious, very well made. As you can see from the menu, there's no very strong beers, just good spins on classic styles. Notably, each of the beers specifically benefits certain organizations or causes. And the names are simply awesome. 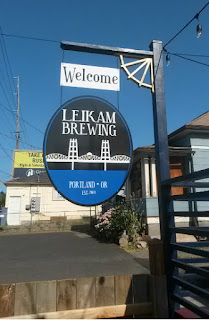 In summer and early fall especially, it's a great spot to kick back and relax. Head to Leikam Brewing for some good beer, and stop at a food cart on the premises, too! 8.5/10
Posted by Aaron at 11:00 PM