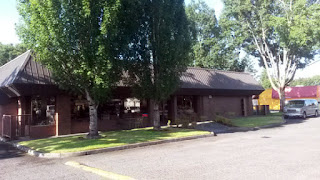 I've clearly been on a coffee shop bender lately, making up for lost time trying a good handful of local businesses. River Maiden, founded in 2002, is a local success story, one reborn after a temporary closing.

In summer 2017, River Maiden lost its previous space after their landlord there wanted River Maiden's business owners to sign a long-term (10-year) lease. In many such landlord-tenant contracts, the commercial tenant is on the hook for the entire period, even if the tenant goes out of business, and lasts until the landlord finds a new tenant. It is unknown if the contract would have included a clause that made the owners personally liable if the business itself folded. Understandably, that was too lengthy a commitment for a small business.

To ease the transition, River Maiden reached out for donations and sold "coffee shares" (i.e. customers paying for a month's worth of coffee in advance).

In April 2018, River Maiden opened its current spot, which formerly housed a Bank of America. It is right on the main stretch of Mill Plain, with a plain sign telling you where it's at.

Plenty of parking in the area. I stopped by on a Sunday morning, and while it wasn't completely packed, the place almost always had a steady line of patrons while I was there. Roughly 5-6 people behind the counter, 3-4 handling the people coming in and at least 1-2 addressing a drive-thru area.

The inside has that homey look with that handmade or hand-drawn tile-style on the face of their counterspace. There are a bunch of tables inside and a few outside. 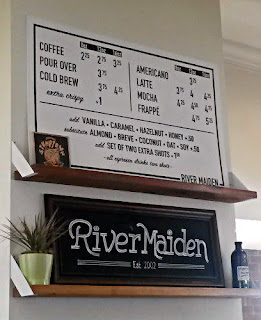 I started with their 8 oz latte ($3.75), wonderfully made with balance of milk and espresso. Awesome latte art on top. They appear to use Stumptown Coffee in their drinks, or at least sell it. 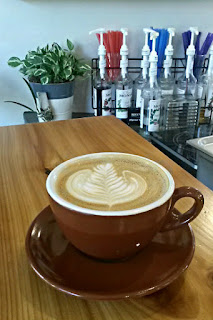 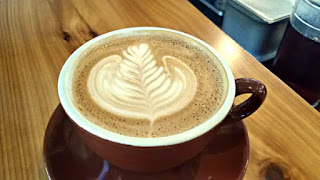 I had also heard about their breakfast sandwiches, which start at $4.75 and cost more by adding certain items to the sandwich. The base sandwich starts with scrambled cage-free eggs, chives, and Tillamook cheddar in their toasted ciabatta bun. I added avocado ($1.75 extra) and ham ($2.25 extra) to mine. 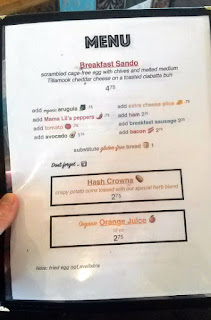 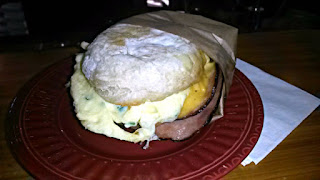 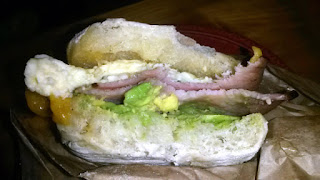 It may have been a more expensive breakfast sandwich than at most places, but it was a damn delicious one. Buttery and velvety eggs, wonderfully seasoned. Melted cheddar. At least a couple slices of ham which had been cooked on a flattop or skillet, then placed in the sandwich. The crunchy ciabatta itself is naturally denser than a biscuit, but it ensures that the sandwich doesn't collapse on you. The creamy avocado added to the experience - not to mention made it a bit more colorful.

Next time, I may opt for some Mama Lil's peppers. A ton of sandwich combinations here.

Other food items even include two forms of avocado toast. The Marigold Toast ($6.75) includes arugula, cherry tomatoes, and parmesan cheese. The intriguing Christmas Toast ($6.75) has garlic aioli and roasted red pepper pesto. There are an array of baked goods in the case, from scones to rice krispy treats. 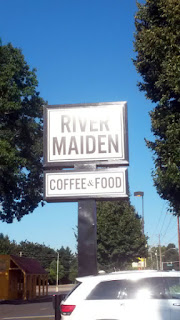 A lovely first experience at River Maiden. I hope to return soon for more. 9/10
Posted by Aaron at 11:00 PM