Just Wing It is a new wing cart that can be found in Portland, Oregon. I saw them for the first time at the 2013 Portland Summer Food Cart Festival in June. 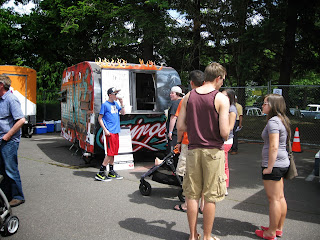 Here, the wings are oven-baked, allowing the wings to fall off the bone. Sauce is then applied before serving with carrots, celery, and choice of blue cheese or ranch dressing.

There are roughly six wing sauces, ranging from the standard Buffalo wing sauce to a Spicy Chipotle. I ended up with the Thai Chili option since Q was really pushing for people to get that. 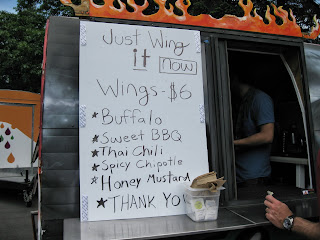 The Thai Chili sauce is really a sweet chili sauce. There's a faint kick after eating a few, but it's predominantly sweet and pleasurable.

I liked the wings here because they really did come clean off the bone. I'm notoriously horrible at eating wings, but even I felt I could eat a dozen of these in a minute -- unless I get preoccupied with licking the sauce off my fingers. 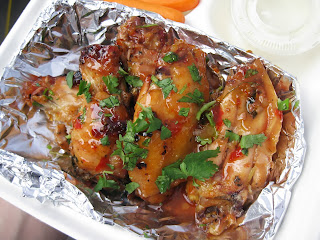 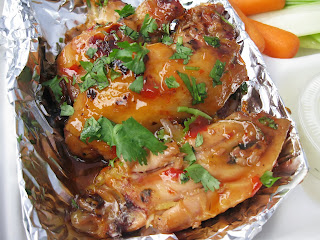 I think baking the wings in the oven does lead to unfortunate situations in closing in the middle of the service. With limited space, there's only so much room and time to make a bunch of oven-baked wings and feed the masses. On the other hand, people who fry wings can keep dropping raw chicken in the fryer and barely miss a beat.

I really love the design of the cart. Reminds me of the now-closed Wicked Wing Shack. 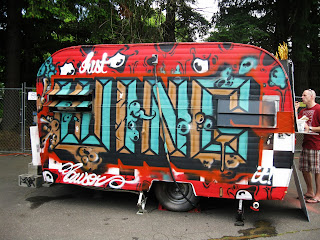 Just Wing It has great food. I'm just concerned that the oven-baked wings concept may not be the most effective for such a small area to work while effectively churning out customer's orders. 7/10
Posted by Aaron at 11:00 PM