Bing Mi is a Chinese crepe food cart on SW 9th (between Alder and Washington) in Portland, Oregon. 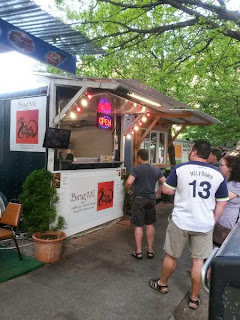 After being featured in several local articles and then making it on Chinese media, Bing Mi has been slammed every day I've gone. As in a line forms before the cart even opens.

This was the line on May 2, the first time I attempted to eat here. This was Bing Mi's line maybe one hour after they opened. It ended up being a 2+ hour wait for food.

The following week, I at least was smart in getting there five minutes before opening -- and I still was only third in line. At least I decided to stay for the food this time!

I don't see long lines like this at Portland food carts too often. Probably the last huge line I recall was when Adam Richman declared Big-Ass Sandwiches the best sandwich for the Pacific NW a couple summers ago. The lines were so long after Travel Channel aired the episode, I remember Brian and Lisa selling out of food in about 2-3 hours.

Jian Bing is a savory Chinese crepe filled with scrambled eggs, black bean paste, chili sauce, green onions, cilantro, pickled vegetables, and wonton crackers. It's then cut in half and presented to you with the attractive cross-section staring you right in the face. 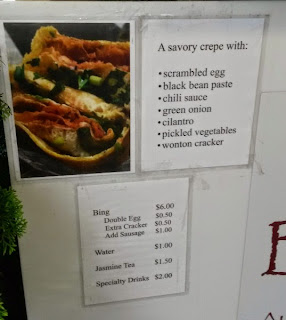 Bing Mi's version costs $6. Ask for hoisin (no charge) to add a sweet dimension. You can add extra egg or an extra cracker for 50 cents more, or add sausage for $1 more.

Three levels of (American) spicy here. You don't need to ask what level I chose. 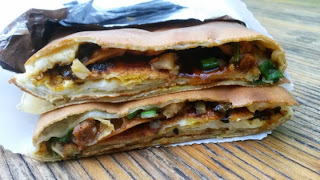 The crepe is cut in half -- cross-section facing you -- then wrapped in foil and into a small white paper bag.

Such a delicious crepe. Explosive flavors from the chili sauce and hoisin, yet everything remains balanced. The crunch of the vegetables and onions, the crisp wonton cracker. It all works. Their spiciest is not the blow-your-face-off spicy, but the flavor is what will keep me coming back.

Next time, I may consider getting one with sausage -- and perhaps a second egg. Not a bad idea to get a bit more protein in the panda's diet.

Bing Mi opens early on the weekdays for breakfast. I envy the people working downtown; this would be such a kickass breakfast....

My friend Steven Shomler was one of the first people to notice this cart. He praised this cart over and over, to the point where I felt the virtual pull by the collar. I again have Steven to thank for this great find. 9/10
Posted by Aaron at 11:00 PM