Bunk Sandwiches is yet another Portland place I had not gone to in eons. Heck, my original post on this place was from October 2011, when their lone spot was on SE Morrison. That spot remains, but in the last year or so, Bunk has expanded to a second location on NE Alberta. This blog post is for the NE Alberta location. 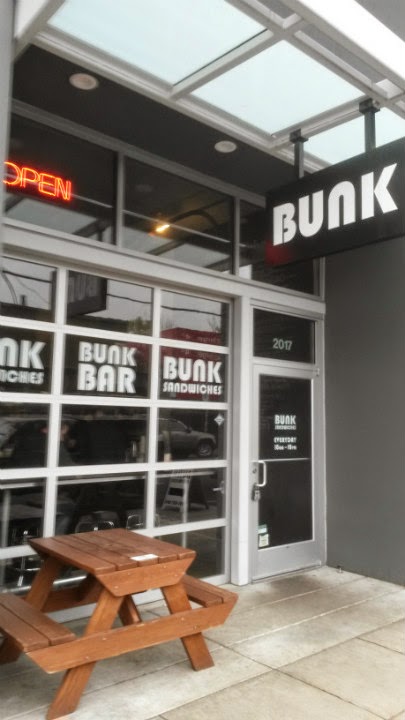 The ever-large menu remains the same and is written on the wall right as you walk in.

I had recently raved about the Cubano from Monk's Deli, and several people asked if I had tried Bunk's version. When I said no, I'm sure a few mics and jaws dropped. Never fear, people, your wait (and mine) is over.

The Pork Belly Cubano ($10) is undoubtedly Bunk's most popular sandwich. Pork belly, ham, Swiss, mustard, pickles inside a toasted roll. All sandwiches here come with a side of kettle chips.

Even before the first bite, I could tell this would be a winner. I saw each layer: pork belly, ham, melted Swiss, pickles, and mustard. The roll had been toasted perfectly. Interesting comparison to note (that in no way affects the review): Bunk doesn't press the sandwich down like at Monk's Deli.

The bread produced this incredible crunch that probably could be heard for miles. The salty ham, juicy pork belly, tangy mustard, zesty pickle, melted cheese...all work. I swore I could also taste a flavor akin to Secret Aardvark habanero sauce in there. The mustard likely metamorphosed into loads of win after warming up.

The Cubano, when done right, is easily in my top three favorite sandwiches list. That list simply rotates based on how I feel on a particular day.

I honestly had forgotten about the following:
If you're in Portland, head to Bunk and get a kickass sandwich. 9/10
Posted by Aaron at 11:00 PM