Teepee's is an Indian frybread cart located at the A La Carts Pavilion (SE 50th and Ivon) in Portland, Oregon. 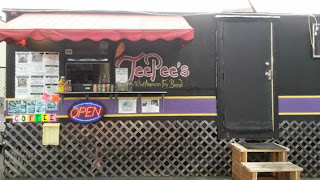 The owners bought the cart from the former Clay's Southwest Flavors and opened in September 2013. A year and a half later, Teepee's is still going strong. The new owner, Rod, is a proud Oglala Lakota Sioux (based in South Dakota). 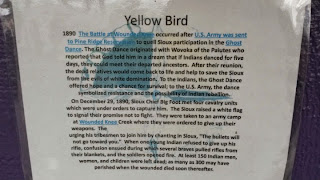 Willamette Week did a nice article on Teepee's and South Dakota frybread.

As one would expect, the Indian frybread recipe at Teepee's is a secret family recipe passed down through many generations. I inquired and the recipe has gone through at least four generations here.

All items on the menu use the frybread to some degree. I saw some interesting takes with hot dogs and pizza, but was happy to see the Indian Taco prominent on the menu. For the sweet tooth, there are several sweet dessert options to choose from.

I simply went with the Supreme Taco ($8), containing both beef and beans, topped with onion, cheese, lettuce, and tomato. I elected to leave off the sour cream that is otherwise included. For whatever reason, pandas don't like sour cream -- unless it's sour cream and onion potato chips or in a 7-layer dip.

I'll be frank: I didn't expect such a hefty taco to come out of that food cart. I mean, we're even talking considerable height/depth on this guy. It was basically a massive taco salad, but with frybread instead of a shell. Definitely a fork-and-knife situation, but if you want to get down and dirty, that's also encouraged.

As advertised, the frybread is soft and fluffy, akin to an amazing yeast doughnut. The frybread itself is not oily, which to me is a sign that it was well-prepared. The frybread also has a slight sweetness which goes well with savory or sweet items.

Thumbs up also for the salsa. I wonder if they will make a ghost pepper salsa for me....

Speaking of spicy, the panda highly encourages adding hot sauce to your taco. There are a couple of options at the cart, but heck, nothing wrong with bringing your own in a backpack.

I'll have to return for desserts. It appears Teepee's will have seasonal options as well.