On November 7, 2017, I went to Zilla Sake & Sushi on NE Alberta Street in Portland to try some real wasabi grown by Oregon Coast Wasabi. 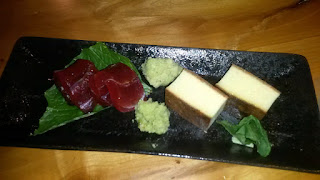 The wasabi plant thrives on dark, wet weather (basically the opposite of chile pepper plants).

Jennifer sells real wasabi, wasabi starter plants, and more on their online store. Wasabi plants will generally take about 12-18 months to grow. The root (rhizome) is the part you'll grate as fresh wasabi, but even the leaves are edible; you can use them like you would use kale. Stick the rhizome in the fridge and you're good to go.

When you grate the fresh wasabi, only use what you think you will need; the grated wasabi will lose its potency after about 20 minutes. I can personally vouch for this. I tried some grated wasabi that had sat out for over half an hour and I probably could have eaten a huge bite of that without flinching. The website has great suggestions for preparing and storing your wasabi.

The green wasabi paste that you usually find in markets and Japanese restaurants is not real wasabi. It's a mix of horseradish, mustard, and green food coloring. It may be much more potent as a result.

The freshly grated wasabi, on the other hand, has a pleasing vegetable flavor and mild-up-your-nose spice. I'm sure many people will be able to notice the difference.

I had two excellent samplers to pair with the real wasabi, albacore sashimi (maguro, I believe?) and tamagoyaki (egg).

While waiting for the sampler dishes, I sipped on some Momokawa sake. Sake science is important.

But the Wasabi Gimlet cocktail stole the show for me. Gin and lime juice with real wasabi. No up-my-nose spice here, just a very refreshing drink. Fairly similar to a margarita without the salt, and gin instead of tequila. 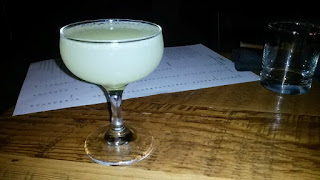 I was still hungry after the appetizers, so I also ordered an 8-piece spicy tuna roll ($11). No pictures of that, unfortunately, as I was too busy devouring everything. Amazing that I only nabbed two photos; I usually take way more than that at an event.

Huge thanks to Steven Shomler, Jennifer Bloeser, and Zilla Sake & Sushi for a great event!
Posted by Aaron at 12:00 AM