In the five years since I first went here, Los Tacos Locos has pared its menu down to Mexican food (mostly tacos and burritos), and the place has gained a strong following. 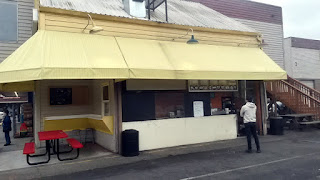 I have actually gone here a handful of times each year for the past five years, but have simply never blogged about it. Los Tacos Locos has been consistent each time, and I'm generally a fan of their breakfast burritos. I've also had their tacos, which were stellar.

For a limited time last year, they even had a Fajita Burrito; steak, beans, rice, bell peppers, and onions inside a burrito-sized flour tortilla.

The special on my visit last month was a Child Verde Burrito ($5.75): tender pork chunks in a green chile sauce, with rice, refried beans, and cheese. As usual, I 86'd the sour cream because I'm usually not a fan of that. I got a hefty burrito, rolled rather loosely this time around. 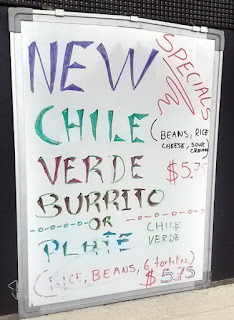 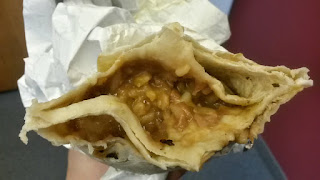 Most of the pork was at the bottom of this burrito, but frankly, it could have been at the top had I started my eating journey at the other end. Perhaps I made the right choice by finishing with a healthy dose of tender pork.

You'll get a mild green sauce and a smoky red hot sauce with your order. I like both, but naturally prefer the spicier red sauce. 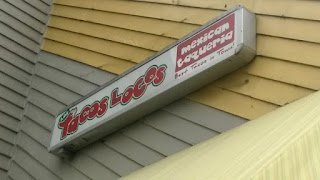 Los Tacos Locos has been my go-to spot for Mexican food, and it helps to work very close by. There's a reason this place is very popular, especially when there's nice weather. 9/10
Posted by Aaron at 11:00 PM