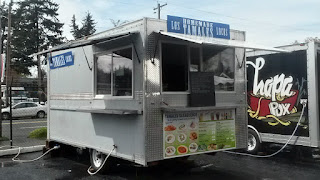 The FoPo Food Cart Pod opened at the end of March 2018 and has space for 19 food carts, with a food tent in the middle. The landlord is seeking carts who will not directly compete with each other (situations with virtually identical menus and probably same cuisine). It's not far from Portland Mercado.

Los Tamales Locos has tamales, but the menu doesn't appear to make that its signature attraction, which puzzles me. There are enchiladas, burritos, salads, and more. 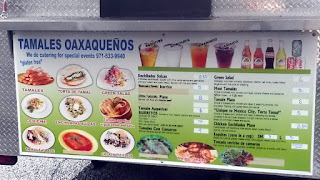 The tamales are just $2 and are very good. There's a choice of braised pork, chicken and rajas (poblano pepper strips), or oaxaca cheese and jalapenos. I got the pork one, which had a healthy dose of protein in it. While some people may think they are on the smaller side, the larger ones I've had bring an abundance of masa and not as much filling. So it's really up to your tastes on what you'd prefer. And hey, the ones here are cheap, so I'd recommend getting a tamale and another item, which I did. 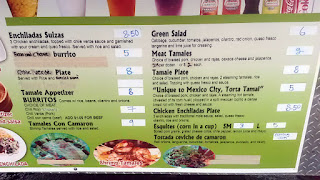 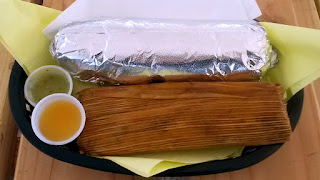 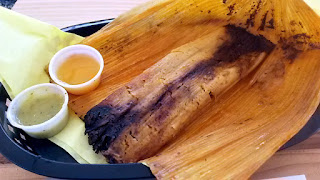 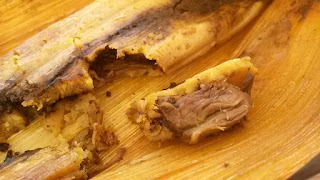 I also got a chicken burrito ($7). Lots of shredded chicken in mine, with rice, beans, cilantro, and onions. That chicken likely had been stewing in a mildly spicy bath for all that time; you could see the red chile powder in there. It comes with a verde (milder) sauce and a habanero hot sauce, both executed well. Nice presentation, being wrapped tightly in foil. 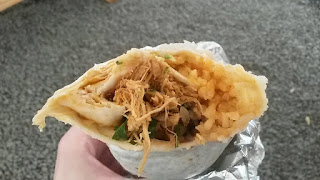 I waited just a few minutes for my order. Weather was rainy and windy on an early April day, so with that and the pod being very new at the time (open probably just two weeks total), I didn't see a lot of foot traffic. They were likely all going to Portland Mercado just a few yards away.

I think the FoPo pod has promise and should hopefully get more customers during the summer months. If they are able to bring in some heavy hitter food carts -- and keep Hapa PDX in that lot -- they should do fine. While they have a tent, the sides remain open to the elements. And hopefully they land a beer cart in that lot; many of the successful pods I've seen have such an option.