Roger That BBQ is located on Brush College Road NW in Salem, Oregon. 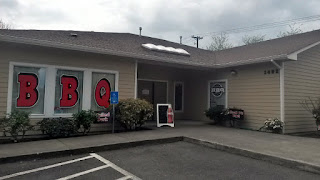 From hobby to BBQ restaurant. That's basically what Roger Schneider did here. This place opened up a couple years ago, and with a couple of my Salem friends telling me to go here, I finally was able to last month. It's a spot north of West Salem, a bit tucked away from the busy streets and trying to be a hole-in-the-wall.

Since the place opened at noon on a Saturday, I casually killed some time and drove up a few minutes before it opened, thinking I had a few more minutes to kill before strolling in.

Nope. The place had a line, and it was still five minutes before opening. Well damn. Guess it must be good. 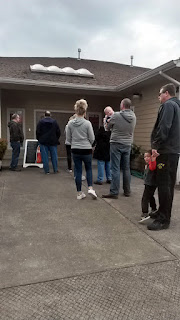 (Just FYI, the first picture I got at the top of the blog post was after the place opened and people could go in.)

Once the doors swung open, we all went straight to the counter to order. They'll call your name and bring you your food after a few minutes.

It's mostly tables and bench seating, with a couple of TVs to watch sports. The inside is dim. Overall, I felt like I got transported to Texas.

The menu is what you'd expect at a BBQ joint: combo platters, BBQ sandwiches, and several meat options and sides. Adding a hot link to your order was $2, and their recent special was wings, in sauces from teriyaki to ghost pepper spicy. 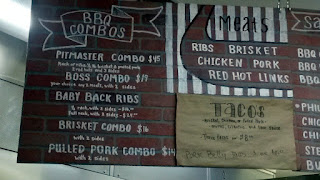 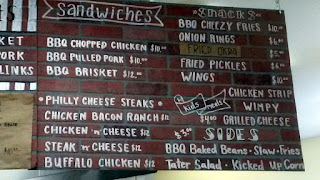 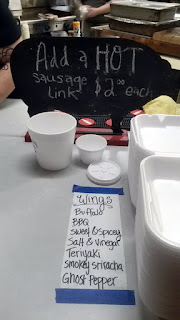 I got the Boss Combo ($19), picking brisket and pulled pork for my meats, and kicked-up-corn and slaw for my two sides. I even added a hot link for an extra $2.

I got my order and...oops, they got the hot link and sides, but I stared at a half-rack of ribs. After notifying the staff of the mix-up, they came back with brisket and pulled pork - and let me keep the ribs (I had yet to touch them). But hey, score one for Roger's staff there. 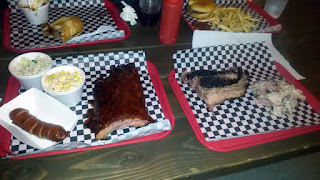 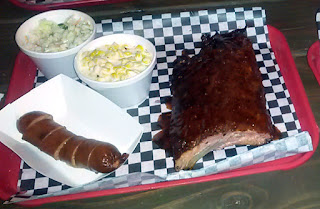 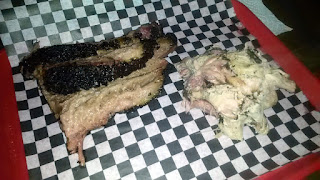 The ribs were fall-off-the-bone tender. Clean off the bone. Sauced up wonderfully. The brisket had amazing bark on the outside, tender as heck on the inside. Best smoke ring I've seen, too. Awesome pulled pork which is fine on its own, but I added some sauce anyway because science. A mild kick on the hot link, and I loved the natural casing.

The kicked-up-corn was interesting, basically corn in a creamy sauce with very mild spice. As for the slaw, it's a bunch of small diced veggies as opposed to shredded or strips of veggies. It's not drowned in creamy dressing either, which is a plus.

The line was pretty lengthy to begin, then slowed down a bit the rest of the time. Still, the place can sell out of ribs pretty quickly; the owner mentioned that 85 racks of ribs sold out in three hours a few days prior.

At the end of the day, I pretty much got a scaled-down version of the BBQ Pitmaster Combo ($45). That option has a full rack of ribs, half-pound of brisket, half-pound of pulled pork, two red hots, and three sides.

I know many people will wonder why I didn't get the ghost pepper wings. I wanted to try a few other menu items first before setting my face on fire. I learned from my Killer Burger experience (maybe).

Luckily, I realized that I had to make the drive back home, so I took a mountain of food home to avoid the food coma. The leftovers fed me for several days. 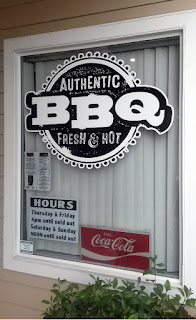 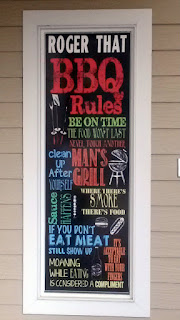 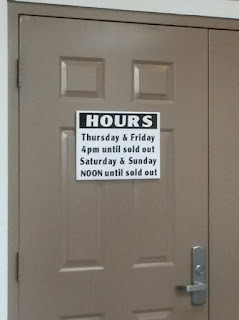 If you're in West Salem, I highly recommend Roger That BBQ. Panda-approved establishment. 9.25/10
Posted by Aaron at 11:00 PM