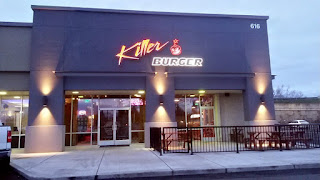 After starting out in the Hollywood district, Killer Burger now has expanded to 11 locations. Hazel Dell is the newest spot as of this writing, opening in January 2018.

As you can see above, I've reviewed Killer Burger several times before; the first two posts were at the Hollywood location, while the third post was at their first Vancouver spot on the east side.

I was also one of the very few winners of their Marine Burger challenge. Although the pics on the original post no longer work, enjoy my suffering through my words -- and why taking that challenge was a horrible idea. Even after doing many other spicy challenges after that one, the Marine, to me, was one of the spiciest I ever did.

Killer Burger's current menu has nine different burgers. The PBPB (peanut butter, pickle, and bacon) remains their signature burger. Each burger comes with (at least) one 8 oz patty, and all orders include bottomless (all you can eat) fries. 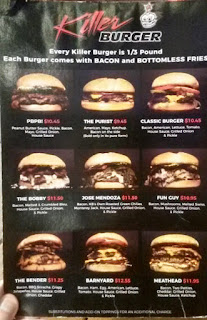 The Hazel Dell spot also has about a dozen taps of beer, so you can enjoy a good beer with your meal.

I went back to the PBPB ($10.45), and it was still every bit as good as when I had it the first time. I personally omit the mayo here. It's basically a thick sweetened peanut butter spread on the top. If you have never had peanut butter on your burger, I highly recommend trying it unless you have an allergy. 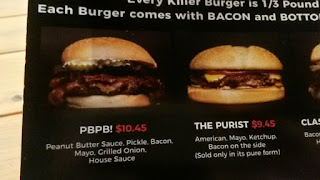 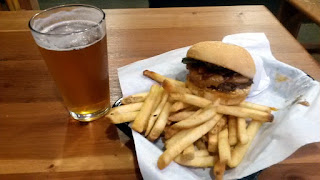 A week or so later, I returned to this spot and ordered the Barnyard ($12.55), which includes bacon, ham, egg, American cheese, lettuce, tomato, house sauce, grilled onion, and pickles. Pretty much combines breakfast and lunch. The egg here is scrambled, so no runny yolk on mine. Perhaps if you let them know, they can do the runny egg for you, though.

The Barnyard was truly a mouthful; I ended up resorting to the fork and knife after the bun started to disintegrate a little.


Killer Burger has long had excellent fries, and I'm happy to report they are the same to me. Crispy and firm on the outside, pillowy on the inside. I've had fresh-out-of-the-fryer fries each time, too. Can't beat that. 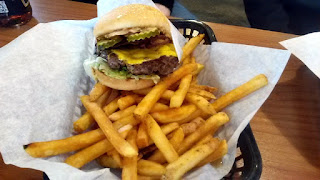 Hazel Dell is getting a ton of great eateries. I'm thrilled that Killer Burger opened a spot much closer to me. If you want a kickass burger, Killer Burger is where it's at. 8.75/10
Posted by Aaron at 11:00 PM