It had been dormant since 2012, but Naader Reda (FreakEating) returned to the Pacific NW for tackle more food challenges. The panda accompanied him for the ride from Portland to Longview. 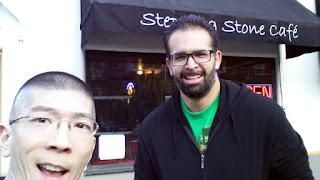 As shown in the links above, Naader visited twice in a two-month span in 2012. He tackled several challenges, some of which no longer exist. The Original Dinerant stopped its 5 lb poutine challenge years ago, while the Mad Greek Progressive Challenge was retired upon the death of owner Pondo Kosmas. China Blue's Lucky Seven Challenge (seven pounds of chicken) also is no longer offered as of early 2018, making Randy Santel their known final winner.

Still, there were many other challenges for Naader to try.

Sunday, March 25
After again driving through California, Naader's first Oregon challenge this year was on Sunday, March 25. He faced a 2-pound fritter at The Happy Donut in Myrtle Creek. At least on the website, there were only four listed winners of the 2-pound challenge, which you have just 30 minutes to complete.

Late on Sunday, I met up with Naader at Stepping Stone Cafe, where he dominated the stack of three mancakes. I completed that challenge years ago, so it's safe to call this a snack for Naader.

Stepping Stone no longer treats this as a challenge; the photos that used to adorn the back wall are no longer there. Facebook had noted some mancake stack winners through last fall, but they seem to be more sporadic, if at all now. 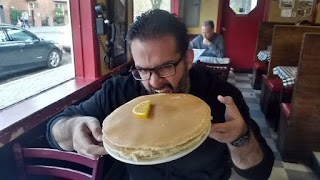 After hanging out for a bit at Powell's Books and some more driving in downtown Portland, we then drove to Salvador Molly's for some spicy fritters.

The original five habanero fritter challenge still exists, but there is a new challenge now. 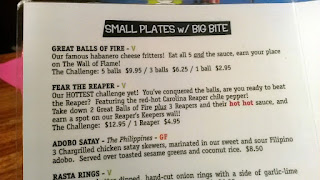 Unfortunately, work called in the morning, so the panda used that lame excuse (heck, we were already short-staffed in the office). After eating two fritters, Naader did the regular habanero fritter challenge, probably a smart idea because reaper fritters may have destroyed OregonMania before it could truly begin. We then parted ways for the night, knowing that many more adventures were ahead.

Monday, March 26
Because of work, I met up with Naader on Monday afternoon instead. He took on the 5 lb calzone at Opa Pizzaria in Portland, Oregon. He live streamed the event, in addition to his usual filming.

I found it more amusing that the staff knows me even though I have never attempted that challenge (and would epic fail doing so). I probably know about half the winners on their Wall of Fame, which include Randy Santel, Ramsey Hilton, Mitch Dombrowski, Ethan Teske, and Erik Lamkin. 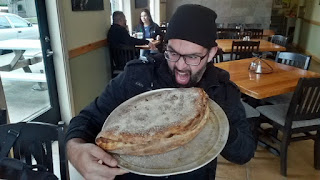 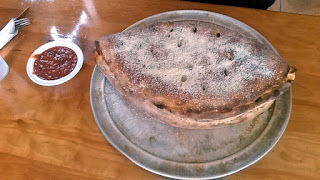 Check out Naader's channel to see how he fared on the calzone!

We then went to Fifty Licks in Portland for some ice cream, then to Voodoo Doughnut (their second location on NE Davis) for more sweet treats. An aerial tram ride at OHSU and a late dinner for the panda at Killer Burger finished off Day 2. 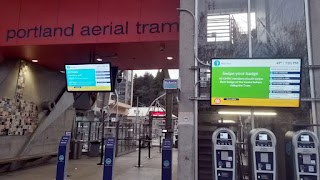 Tuesday, March 27
Day 3 of OregonMania III was a morning meetup, as Naader would head to Seattle for the next couple of days.

We went to Stuffy's II so that Naader could take on the Big Stuff challenge, basically a 7-pound breakfast platter of hash browns and other tasty items. Naader opted for the Fajita Big Stuff, which has hash browns, steak, green peppers, onions, tomatoes, pepperjack cheese, and cheddar cheese. Sour cream and salsa is on the side, and you also have to eat three extra-large tortillas. It's served on a large (18") pizza pan. 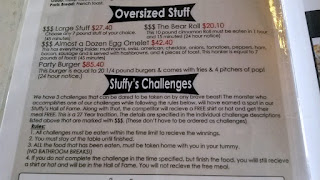 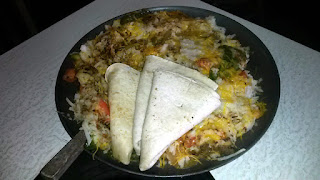 Meanwhile, I enjoyed a Stuffy's omelet, which had ham, onions, peppers, cheese, and tomatoes inside, then topped with sausage gravy It was a bit light on the ham, but otherwise very good. 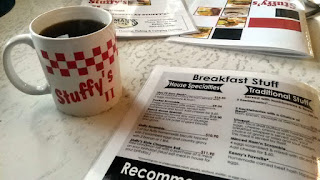 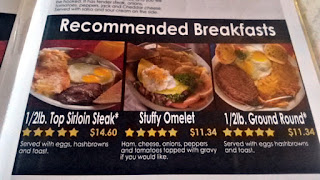 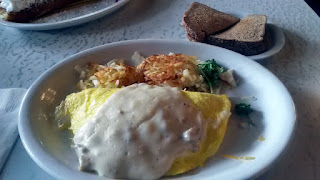 Thursday, March 29
On the final night of OregonMania III, we returned to Stuffy's as Naader joined two others to take on a 25-pound cinnamon roll. Dubbed the "Party Roll," it is Stuffy's newest creation.

The 6-pound "regular" cinnamon roll has been a menu item for years, and probably would be a decent challenge for a number of big eaters. It remains a very reasonable $12.

In 2013, former competitive eater Jamie McDonald ate a 10-pound "Bear Roll" in 75 minutes. The "Bear Roll" became a challenge right after, and I do not know of any other winners since its inception. This monstrosity would only set you back $20 if you failed. Of course, it might also lead to people never wanting another cinnamon roll due to sugar overload. 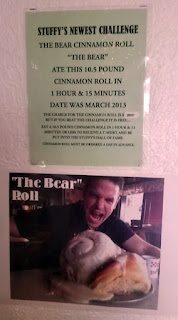 For the event, the Party Roll was placed alongside a Bear Roll and a regular cinnamon roll.

The bakers must have had additional fun with this one. On this night, the regular roll weighed six pounds, the Bear Roll was 12 pounds, and the Party Roll clocked in at a whopping 25 pounds. I took a couple photos, but they really don't do it justice. That Party Roll is ginormous. 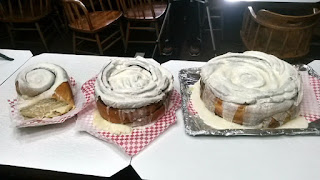 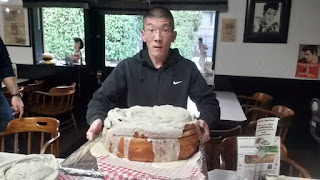 I got a (somewhat blurry) photo of the inside. Quite an awesome sight. Just imagine three people trying to eat a massive, dense cake in one sitting, though. 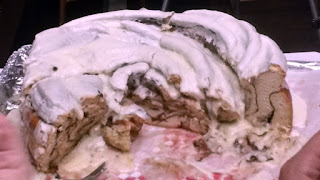 I picked at some of the remnants after it was over. The inside was still moist, warm, and soft. Somehow, they managed to perfectly cook the roll all the way through. I assume they did a few test runs at this before putting it on their website.

To round out OregonMania, Naader appeared in a couple of videos for my channel. They will both eventually get uploaded. The Last Dab Pepper X sauce may or may not make an appearance. 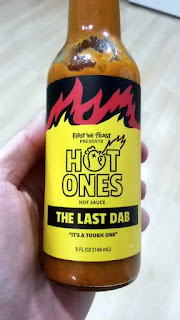 Epilogue
Naader headed to Salem late Thursday night. The next day, he took on the Goliath Burger at Adam's Rib Smokehouse, located next to Willamette University. This formally ended OregonMania III.

Returning home, on Saturday, March 31, Naader went solo on a 24" pizza (about 8.5 pounds) at Neighbors Pizza in Olivehurst, CA. It's normally a team challenge. Only two people (Molly Schuyler and Stephanie Wu) had previously finished the pizza solo.

Tons of fun and lots of epic eating throughout the week, and schedule permitting, I will make it down to Southern California again later this year. Hopefully, it won't be another six years until the next OregonMania.
Posted by Aaron at 11:00 PM