Belmont Kitchen is located at The Bite on Belmont pod (SE 42nd and Belmont) in Portland, Oregon. 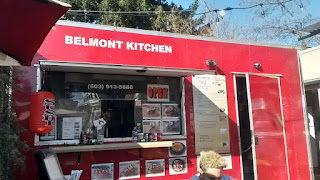 The Bite on Belmont is that hole-in-the-alleyway food pod across the street from where the Good Food Here pod used to be. A few of the carts from the old pod migrated to the new one, while others moved to other pods.

Belmont Kitchen serves sushi burritos and yakisoba, with other Japanese food items on the menu such as shrimp tempura and pan-fried dumplings. Sushi burritos come in two sizes, regular and mega. 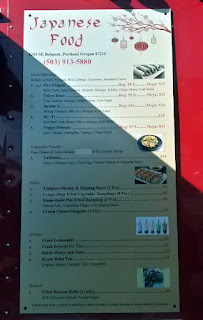 Sushi burritos are basically oversized sushi rolls with a lot more filling in them. They only started appearing and getting more popular in the past two years or so. Frankly, it's a clever name to sell the product, as a lot of people around here enjoy burritos and sushi, but probably want a larger sushi portion (usually the rice and proteins) to mirror the Mexican counterpart. Enter the sushi burrito.

The Fire Dragon sushi burrito contains spicy tuna, spicy salmon, jalapeno, masago, tobiko, crispy onion, and (imitation) crab salad. A generous amount of protein here, although I could only spot a couple of jalapeno slices. I amped up the spice (in a different way) by adding more wasabi. Overall, a very solid sushi burrito. 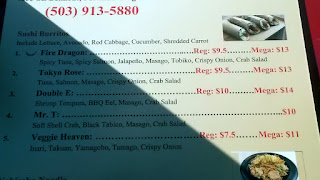 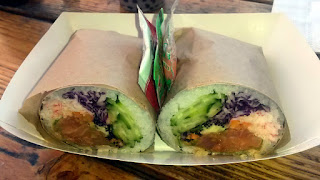 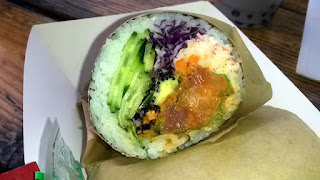 The Mr. T sushi burrito contains soft-shell crab, while the Double E has shrimp tempura and BBQ eel. Of course, the yakisoba is tempting, and I'll have to try that at some point, too.

If you're craving sushi burritos, Belmont Kitchen is a solid spot to get one! 8/10
Posted by Aaron at 11:00 PM