Woodsman Tavern is located at the corner of SE 46th and Division Street in Portland, Oregon. 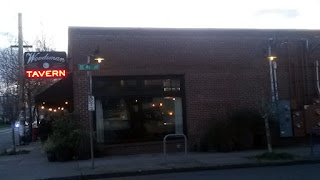 Woodsman Tavern opens for dinner only on the weekdays, and is open from brunch to dinner on the weekends. As a result, they end up having three different food menus (four if you include a dessert menu).

I strolled in on a Saturday afternoon, towards the end of the weekend afternoon (late lunch) menu shift. That menu includes several appetizers, burgers, sandwiches, and even oysters on the half shell. 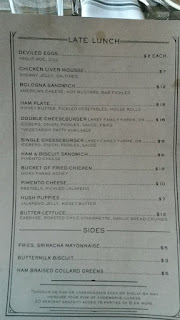 Deviled eggs are $2 each, with trout roe and dill on top. Simple dish, and everything worked. The dill added an extra dimension of flavor. Lovely presentation. 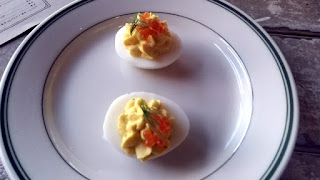 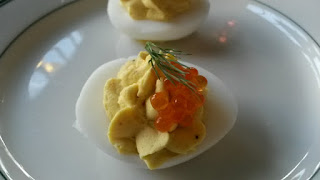 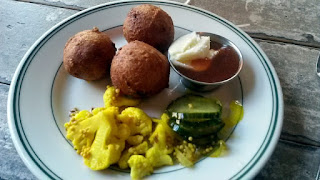 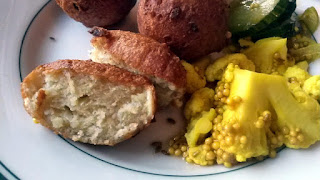 Admittedly, I probably would not have stumbled into Woodsman Tavern had I not received a golden tip that Pliny the Younger would be tapped that day (March 3). It was amazing timing too, as I got to the place around 4:45 PM and the hostess stated that Pliny the Younger was tapping at 5 PM. Additionally, Woodsman Tavern had already tapped Pliny the Elder, so anyone searching for those two beers would have hit the jackpot. 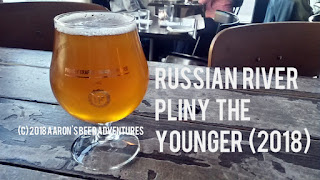 I go a bit more in-depth on my Pliny the Younger experience on my beer blog. As you will see, this is the fourth consecutive year that I've been able to try it.

While I only ate a couple of small appetizers at Woodsman Tavern, the service was great and the beer was on point. I'll need to return for a full meal. 7.5/10
Posted by Aaron at 11:00 PM