The Kroft is located in the Anaheim Packing District, a food hall on S Anaheim Blvd in Anaheim, California. 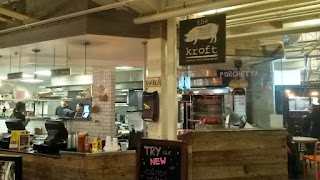 I had not eaten poutine in a long time, so of course my first stop going into California was at The Kroft. This is probably as close to a poutinerie I'm aware of in Anaheim.

There are around seven different poutine options on the menu, ranging from the classic (fries, gravy, and cheese curds) to fancier options like Japanese Katsu Curry. There were also specials on an adjacent board that included Flaming Hot Cheese Curds (which may use the Flamin' Hot cheetos powder). 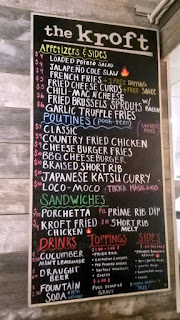 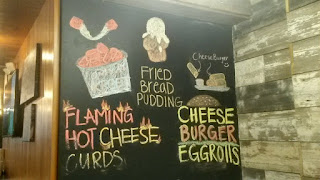 Sandwiches on the menu include porchetta, fried chicken, and prime rib dip options.

Going back to my Hawaii roots, I ordered the Loco Moco Poutine ($10), which has diced hamburger patties, fried onion strings, diced green onions, and gravy with a fried egg on top. The egg was slightly overcooked, but otherwise good. I could only see a few curds in there, typical for an American spot doing poutine (the Canadians put far more curds in their poutines, so I would recommend going up north for the real deal). 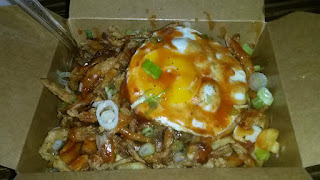 My friend got the BBQ Cheeseburger Poutine ($10), which basically had BBQ sauce instead of gravy. Bacon usually comes with the dish but my friend doesn't eat bacon (blasphemy!) so the pictures do not show that. He also didn't see cheese curds in his version, just the usual cheese that would be in a cheeseburger. Way more of a non-traditional poutine than usual. 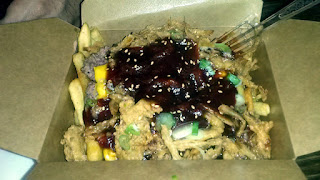 I probably should have considered asking for flaming hot cheese curds in my poutine. It would have cost a bit more, but perhaps it would have been worth it.

The Anaheim Packing District building has many different eateries, so there should be something for everyone in there. 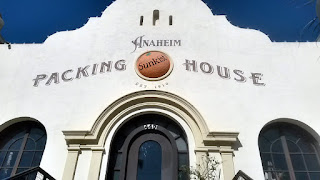 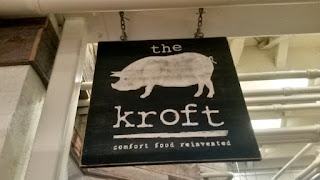